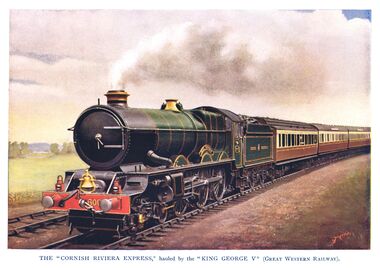 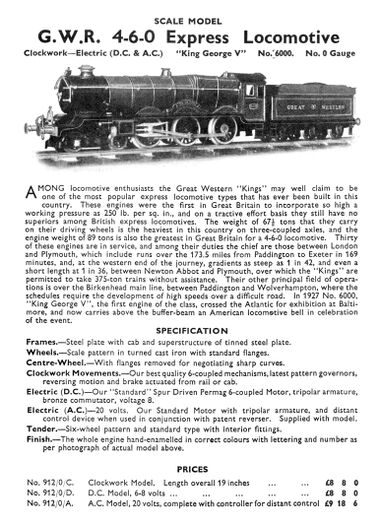 This was one of the four locomotive designs made by Märklin for Bassett-Lowke in the mid-1930s. 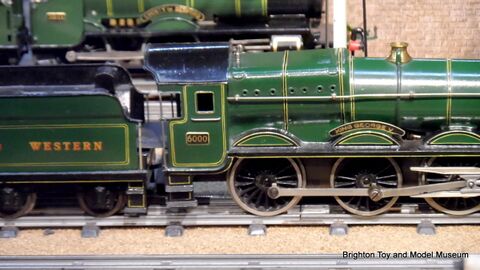 AMONG locomotive enthusiasts the Great Western "Kings" may well claim to be one of the most popular express locomotive types that has ever been built in this country. These engines were the first in Great Britain to incorporate so high a working pressure as 250 lb. per sq. in., and on a tractive effort basis they still have no superiors among British Express locomotives. The weight of 67 1/2 tons that they carry on their driving wheels is the heaviest in this country on three-coupled axles, and the engine weight of 89 tons is also the greatest in Great Britain for a 4-6-0 locomotive.

Thirty of these engines are in service, and among their duties the chief are those between London and Plymouth, which include runs over the 173.5 miles from Paddington to Exeter in 169 minutes, and, at the Western end of the journey, gradients as steep as 1 in 42, and even a short length at 1 in 36, between Newton Abbott and Plymouth, over which the "Kings" are permitted to take 375-ton trains without assistance. Their other principal field of operations is over the Birkenhead main line, between Paddington and Wolverhampton, where the schedules require the development of high speeds over a difficult road. In 1927 No. 6000, "King George V", the first engine of the class, crossed the Atlantic for exhibition at Baltimore, and now carries above the buffer-beam an American locomotive bell in celebration of the event.

The "King George V" (1927) was designed by Charles Collett's team in reponse to Southern Railway's very similar-looking Lord Nelson, which had just taken the crown of being Britain's most powerful locomotive away from the GWR's more classically-proportioned 4-6-0 "Castle" class.

Thirty-one "King class" (or "6000-class") locomotives were built from 1927 onwards, and three are preserved, with the King George V held by the National Railway Museum's collection.