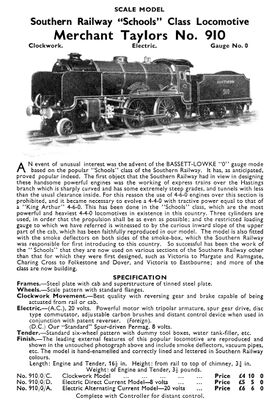 A green 4-4-0 gauge 0 Schools Class locomotive model of SR 910 Merchant Taylors, made by Märklin for Bassett-Lowke.

This was one of the four locomotive designs made by Märklin for Bassett-Lowke in the mid-1930s.

The Schools-Class locomotives were named after famous schools, and Merchant Taylors school was originally founded in London in 1551 by The Worshipful Company of Merchant Taylors, a tailors' guild that had grown to become more of a philanthropic organisation.

We think that this is the first of the "Märklin Four", and it's unusual in that our example's its 20V AC mechanism is actually made by Märklin as well as the bodyshell (this is reflected in the 1937 B-L listing, which amongst the specifications for the different options, lists the AC version as "(foreign)".

Our very strong suspicion is that Märklin may have designed and prototyped (and perhaps even produced) the AC version of locomotive themselves with a view to manufacturing it as a Märklin product before being approached by Bassett-Lowke, and that the loco may have then been "co-opted" to become part of the Bassett-Lowke deal – the AC versions of the other three locos in the series listed in the 1937 catalogue don't have the "Foreign" tag against their AC motor specifications, which makes it look as if the (earlier) "Schools" locomotive might have been originally manufactured as an all-Märklin product, or originally designed to take a Märklin motor rather than a B-L version.

The model's design is also perhaps not quite as spot-on with respect to the original as one might have expected if Henry Greenly or another of Bassett-Lowke's favourite UK-based designer-engineers had been involved from the beginning, which again suggests that perhaps this might have started out as specifically a Märklin project.

AN event of unusual interest was the advent of the BASSETT-LOWKE "0" gauge model based on the popular "Schools" class of the Southern Railway. It has, as anticipated, proved popular indeed.

The first object that the Southern Railway had in designing these handsome powerful engines was the working of express trains over the Hastings branch which is sharply curved and has some extremely steep grades, and tunnels with than the usual clearance inside. For this reason the use of 4-6-0 engines over this section is prohibited, and it became necessary to evolve a 4-4-0 with tractive power equal to that of a "King Arthur" 4-6-0. This has been done with the "Schools" class, which are the most powerful and heaviest 4-4-0 locomotives in the country.. Three cylinders are used, in order that the propulsion be as even as possible; and the restricted loading gauge to which we have referred is witnessed by the curious inward slope of the upper part of the cab, which has been faithfully reproduced in our model. The model is also fitted with the smoke-deflectors on both sides of the smoke-box, which the Southern Railway was responsible for first introducing to this country.

So successful has been the work of the "Schools" that they are now used on various sections of the Southern Railway other than that for which they were first designed, such as Victoria to Margate and Ramsgate, Charing Cross to Folkestone and Dover, and Victoria to Eastbourne; and more of the class are now building.