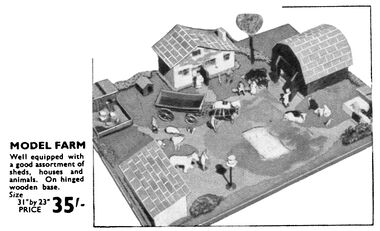 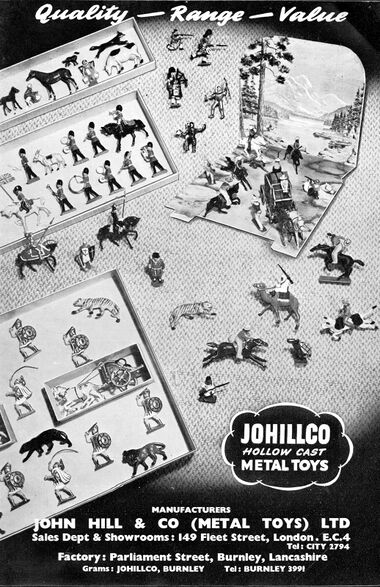 Johillco (John Hill & Co) was established in 1898. Where the name came from is unknown as the creator was called Mr F.H. Wood (!). Wood was a former employee of W. Britain and therefore already experienced in the toymaking trade.

Sadly there is not much information about the company before the First World War as information is sketchy, it can also be hard to find or identify figures created during this period as a contemporary catalogue has yet to be found.

After the war far more is known about the company. For instance in 1932 it was employing 400 people through twelve departments; Designing and Modelling Room, Die and Mould Making Shop, Stamping and Press Shop, Metal Refining Plant, Trimming and Assembling Plant, Moulding and Casting Foundry, Process Painting Room, Carding, Boxing and Parcelling, Printing, Home and Export Packaging, Stock and Box Stock Rooms and Showroom and Offices.

While famous for its lead figures, Johillco also produced novelty items such as brooches based on the FA Cup and Zodiac signs as well as many items focused on the 1937 Coronation, such as crown-shaped souvenirs, boxed display cases for horse-drawn carriages and models of King George the Fourth and Queen Elizabeth.

Production was shut down during World World Two and like many toy companies the factory was bombed in the Blitz. However, the majority of the moulds survived and were quickly translated to a new location in Burnley in preparation for restarting production after the war.

In 1946 the company was taken over by Mr Alec Standing, the proprietor of a printing business, and the company name was altered to "John Hill & Co. Metal Toy Manufacturers" retaining the "John Hill" but making it clear that the business was under new management. Some changes were made in production and only figures that were guaranteed to bring in good sales were produced, with a balance being struck between figures that sold well and those that were easy to produce. Most popular Johillco lines such as Cowboys, Indians, Knights and Zoo Animals reappeared, but some of the farm sets such as the horse-drawn cattle wagon were never produced again after the war, as it was decided that their production costs were too high.

The company was slow to adapt to plastic toys and only began producing these in the mid-Fifties (as "Hilco"), a few years before the company finally went under, ceasing all production.