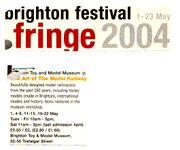 2004 "Brighton Fringe" listing for "The Art of the Model Railway", a special "Hailey Models" exhibition at the museum during May 2004 [image info]

Hailey Models (or "H Models") was a UK company that produced wooden model railway accessories, that operated from 46 Queens Road, Brighton. They advertised in Meccano Magazine in the 1920s and 1930s.

It's been noted that some gauge 0 "Hailey" pieces look very like their Bassett-Lowke counterparts, leading to suspicions that that Hailey (and Hugar Models) probably manufactured those pieces for B-L. Given that B-L subcontracted so much of their output, this isn't an unreasonable suggestion.

This text is presumably from the museum's 2004 "Hailey Models" exhibition, "The Art of the Model Railway".

He had visited Canada during 1906 and had been very impressed by the architecture of log cabins and saw mills. This was reflected later when Hailey Models produced cowboy shacks (see illustration).

W.A.R. Hailey’s sons were soon assisting with the production of models. William (born 1920) remembers attending the British Industries Fair at Wembley in 1934. His brother, Guy, designed an aircraft hangar and a garage which was adorned with Chad Valley diecast petrol pumps.

Several items were contracted to local firms: miniature wooden barrels and the brick and slate impression were achieved by using a purposebuilt rolling machine which had patterned rollers. The workshops for this purpose were located in Gloucester Road. By a process of elimination, it was found that Russian plywood gave the best results.

During 1935/36, the firm became a company and relocated to premises in the Southern Railway Goods Yard, Sackville Road, Hove. Railway related buildings made up the bulk of the firm's output, and many buildings fitted with electric lights.

Guy was a draughtsman, producing all the plans and running the assembly shop. William worked in the paint shop when he was 15. During busy periods, such as Christmas, Williams school friends were employed. In 1936/7, when Trix Twin Railway was marketed by Bassett-Lowke, Guy won the contract for designing the buildings. It is also believed that Hailey Models contracted items for Milbro (Sheffield), Hamleys (London), and Bassett-Lowke (Northampton).

Boxes for the models arrived flat-packed, having been produced at a small factory under the Railway Viaduct on Lewes Road. Another local firm supplied the tin station awning. Companies such as Oxo and Bovril etc. provided the small enamel signs free of charge as a way of advertising their products.

The registered office of the company was Church Road, Hove, at the offices of Russell, Fleming, Boyce and Co.

Sadly, Mr W.A.R. Hailey was killed in a road traffic accident in 1937 and the company went into liquidation in 1938. The new owners, however, continued trading as Hailey Models. They were still trading in 1974 (according to the Brighton and Hove Directory).

There is a collection of Hailey Models wooden luggage (with box) in the Glamour of Brighton display in the museum foyer.