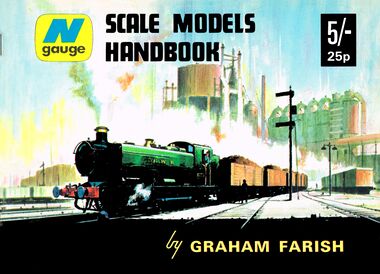 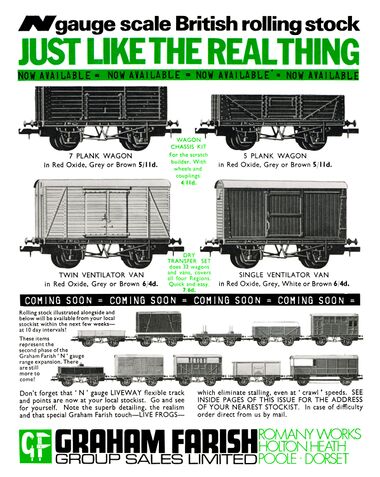 1970: Advert: "Just like the real thing". Note that only four of the range of wagons are claimed to be available at this point, the rest are "coming soon" (Model Railway News, November 1970 issue) [image info] 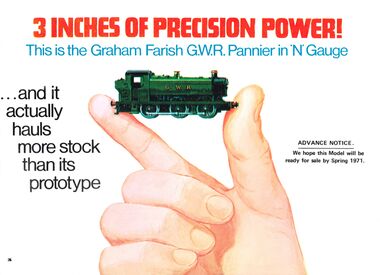 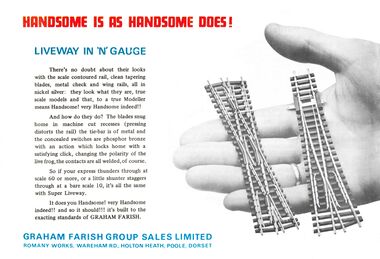 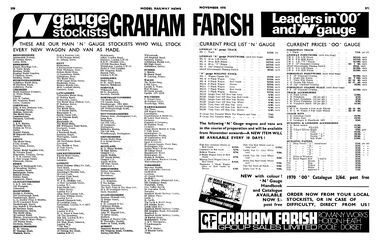 Graham Farish's N gauge range ("GRAFAR") was launched in 1970, with the "N Gauge Scale Models Handbook" proudly announcing, track rolling stock, and "Liveway" points ... but not yet any locos to pull them (the Pannier Tank loco being described as being expected in Spring 1971).

I do not know what I should say about this, our first Handbook on 'N' gauge, which development of the hobby we have been following for quite a few years.

It seemed to us that 'N' gauge had no roots in England, the Locomotives and Rolling Stock were made on the Continent—with a few notable exceptions, they were Continental types too — the gauge could hardly flourish under such disability. We therefore laid our plans with care, what seemed to be chiefly needed was British type rolling stock and British type locomotives. These were put in hand at once, they would not only be British types, but British designed and British made and, dare we say it, at British prices which do not have to be as astronomical as those made on the Continent.

You will not be surprised that we also gave attention to Track and Points — after all, we were the original inventors of flexible track, we like to think we have maintained our position — our track is more flexible than most and the rail section is correct, even to the bullhead in this minute scale, and the points as they are produced will have live frogs, metal wing and check rails, flexing points and minute concealed switches.

So you see we have been quite busy and probably by the time this is in print your Dealer will have stocks — go and see him but take a magnifying glass with you — you'll need it!

We have plans! Modest sensible plans!! Plans well within our ability to bring to a successful conclusion: for as I have said before, we make everything ourselves — think of it! In January 1970 we decided to enter the 'N' gauge field and by August 1970 some 25 new items were checked and approved for production — and by September production was started — big deliveries were made in October and every week or so we produced a new line.

We shall produce a range of Locomotives, Rolling Stock galore and a host of fine new products designed particularly for YOU – and need I say it, at prices that will make you ask for GRAHAM FARISH.

Our feeling is that there is not the smallest reason for 'N' gauge to be more expensive than '00' if the material can be made in quantity: the only exception is perhaps Locos, which like watches, must be made with care and do not lend themselves to mass production in this tiny gauge. So we have spent a tremendous amount of thought and money on tooling to really put 'N' gauge on the map and it is our sincere hope that we shall have the support of all 'N' gauge enthusiasts.

Do not therefore, expect spectacular results — the build up of 'N' gauge will be steady and persistent and we shall publish from time to time the names of our nation-wide Stockists who will be pleased to show you the latest of our productions. We think they are pretty good value - I hope you will too!

WHAT'S SO SPECIAL ABOUT 'N' GAUGE?

Briefly, its size, for it is half the size of the familiar 00 and HO and is designed to operate if need be on a minimum curve of only 9" radius - thus quite an effective miniature layout need only occupy the area of an extended dining table. The smallest oval of track will sit quite happily on a baseboard 20" x 30". In short the system allows you to start very small, indeed you do not need to provide any special facilities.

But beware! This is a fascinating hobby and the minimal size will in due course be frustrating and indeed wasteful, if to add anything at all entails starting again from scratch. We think the minimum size to start should be 24" x 48", this is a handleable size and will give you quite enough scope as a beginner and can be readily extended if and when you wish to do so.

'N' gauge has been a long time coming, chiefly because the miniature motors presented manufacturing problems and by reason of this are expensive. The locomotives are really a marvel of miniature engineering and will haul as a rule, more rolling stock than their prototypes normally do. That a locomotive is expensive cannot be denied and it needs careful handling and use, for it is a precision job, not robust enough to be handled by children, for whom it is not intended.

At this stage we should make it clear that GRAHAM FARISH 'N' gauge are scale models, correctly detailed to the finest degree possible, having regard to the limits of practicability. They are in no sense toys suitable for children, except under the supervision of an adult. There are, of course, toy railways available which are especially designed for children, they are much more robust, less accurate and of course much cheaper and can be operated on the floor, but even these are not "child proof". If you start with scale models it will cost a little more, but no matter how big your layout grows, you will not need to scrap anything - and in most cases grow it will, for as I have said before, this is one of the world's most absorbing hobbies, always at hand and well within the ability of any intelligent and careful schoolboy - or business tycoon and the whole gamut of those between.

What is so special? Apart from the extreme convenience of miniaturisation, it is the provision of material which, whilst leaving scope for careful work and ingenuity, eliminates the need for equipment which the modeller is unlikely to have, thus practically all work can be done with simple tools. A hammer, saw, drill and screwdriver, knife and scissors with, of course, a paint brush, are the main requirements, but by the nature of the work somewhat smaller tools make things easier and the model shop as a rule can provide what you may need from time to time, but basically the equipment is simple and most handymen will have almost all they need.

SKILL. It would be idle to suggest that no skill is needed, but one would rather say care is the most important, for is not skill care reinforced by experience? Provided the work is not rushed or done in a slovenly way to begin with, ability will soon follow and needless to say one should tackle the simple jobs first.

With the advent of the GRAHAM FARISH 'N' gauge range, a completely new interest opens up for the modeller who wishes to model a purely British 'N' gauge layout.

As you can imagine, a great deal of thought and planning has been necessary to achieve such superb scale models at such reasonable prices. For example, in the case of most vans, they are available in four basic colours, grey, brown, red oxide and white, and the roofs will vary in the shade of grey, so that it will be possible to have a number of the same basic vans all looking slightly different. To add further to the selection, a sheet of dry transfers is also available, so that vans can be lettered in different Railway Companies and numbers etc., to your choice. The advantage of these Transfers of course, is that the letters and numbers can so easily be transposed to the vans by the pressure of any soft point (like a pencil) – no mess, no trouble at all, and instantly ready for use.

Naturally there will be more than one van in the range, so you will readily perceive how the differing range can grow. Now let us turn to open wagons. Here we have 5 plank and 7 plank, and three basic colours, grey, brown and red oxide. The only limit to your choice is your pocket — and I can assure you this won't make a serious drain — now add the steel mineral wagons in grey and red oxide, the size of the range begins to make one boggle. Even private owner wagons have not been forgotten and these will be available as fully decorated and completed models.

Our plans cover a very large range of goods rolling stock, many of which are already listed in our Catalogue. We have arrangements with our stockists that all new lines of rolling stock will be sent to them as soon as available from the production line, and this will mean a considerable range of British type rolling stock at prices that are within the reach of all, so make a practice of seeing your Dealer frequently — he will have a constant succession of exciting new items to show you, not only goods wagons and vans but many other things as well.

Brake vans and other long wheelbase rolling stock are all under development, and this includes some most endearing 4-wheeled coaches based on some of the early models which embraced that wheel arrangement. Perhaps you can envisage that 'N' gauge layout of the delightful G.W.R. branch line of your dreams, with our superb 'N' gauge Pannier tank Loco hauling a train of four of these little 4-wheeled coaches gently out of the station at scale speed, made possible because LIVEWAY 'N' gauge pointwork is used with the 'live frogs' which prevent stalling. In truth, a dream you can turn into reality, because space limitations no longer restrict with 'N' gauge, and because GRAHAM FARISH have provided you with the British types of rolling stock and locos, the lac of which has held back this, the most interesting of modelling gauges, for so long in this country – in America, Canada, and the whole of Europe, 'N' gauge is overhauling '00' in popularity – soon it may well be the same in Britain.

Handsome Is As Handsome Does!

There's no doubt about their looks with the scale contoured rail, clean tapering blades, metal check and wing rails, all in nickel silver: they look what they are, true scale models and that, to a true Modeller means Handsome! Very Handsome indeed!!

And how do they do? The blades snug home in machine cut recesses (pressing distorts the rail), the tie-bar is of metal, and the concealed switches are phosphor bronze with an action which locks home with a satisfying click, changing the polarity of the , live frog the contacts are all welded, of course.

So if your express thunders through at scale 60 or more, or a little shunter staggers through at a bare scale 10, it's all the same with Super Liveway.

It does you Handsome! Very Handsome indeed!! And so it should!!! It's built to the exacting standards of GRAHAM FARISH.