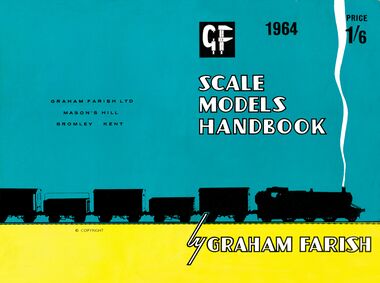 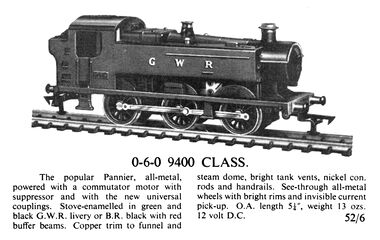 The initial range of Graham Farish 00-gauge locos was slightly idiosyncratic. Most other manufacturers' loco models were either driven by a motor in the locomotive (with the tender not doing much), or were "tender drive", with the tender being motorised, and pushing the loco along.

The Farish tender loco models found a third way – the motor was in the tender, the loco was driven by its own drive wheels ... and the two were connected together with a rotating driveshaft, fitted with a universal coupling so that the whole apparatus could take bends. Some model railway owners founf the existence of a lorry--style driveshaft perplexing, and it sometimes also resulted in handling characteristics that did not always endear themselves to the model railway community. As a result, some buyers stayed away from the Farish loco range, apart from the tender locos (which, lacking a tender, had the motor in the engine).

In the later 1950s, Farish cleared their loco stock, and in the 1960s, tried again, relaunching the range with two new locos that were both tank locos, perhaps to distance them from some of the bad reputation of the earlier "driveshift" tender-loco models.

By the 1969 Scale Models Handbook, Farish still only had the two tank locos, the two Pullman carriages, and suburban carriages, and while they now also sold carriage kits, the goods wagons had mysteriously disappeared, listed under "Future Productions".

The wooden-sided-style wagons did reappear in 1970 advertising (along with kits), but 1970 also saw the launch of the Farish N-gauge range, shortly after which the company decided that it was better off dropping the 00-gauge range and concentrating on the new format: there were too many companies already fighting over the 00-gauge market, many of them were much bigger than Farish.