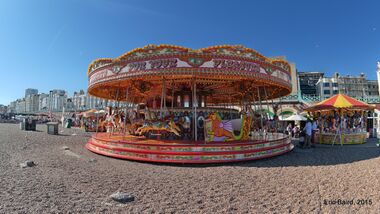 The origins of the funfair go back into antiquity, with drawings existing of ancient wooden wheel-rides based on waterwheel and water-lifting designs, but the modern phenomenon of the funfair only really took off in the Nineteenth Century, with advances in industrial technology and with improvements in road and rail transport helping to create a demand for things for people to do on a day out.

Better roads made it easier for mobile funfairs to get around the country, and rail travel in the mid-C19th let London "townies" visit seaside resorts like Brighton and Blackpool where the pleasure piers had "static" rides.

The second feature of the mid-C19th that made travelling funfairs more viable was the appearance of portable steam power - instead of having to move their equipment form town to town using animal haulage, and having rides powered by strong showfolk hauling on ropes, it was now possible to to haul very heavy pieces of equipment between towns using a traction engine, and once at its destination, the "Showman's Engine" could be parked and power a ride using a belt-drive).

Steam-powered air compressors could also blast air through barrel-organs to create a sense of occasion and attract people from miles away by their sound, and as electrical generator technology improved, the steam engines could be used to generate electricity and power extravagant lighting and new ride mechanisms.

Funfair artwork was typically gaudy, with rides often painted in high-visibility yellow with red highlights and black text. Letter-work was extravagantly florid, and it wasn't unusual to see carousels adorned with mirrors and anything brightly-coloured that could catch the eye.

In the States, the development of funfairs was partly driven by a succession of State and World Fairs, each one of which tried to best its predecessors with some new giant novelty that people would attract visitors. an obvious candidate for a large temporary structure and ride was the Big Wheel, and a number of large wheel-rides appeared in the US and Europe in the 1890s, with bridgebuilder George Washington Gale Ferris, Jr. (1859-1896) famously producing his Ferris Wheel in Chicago in 1893, using structural steelwork techniques and a giant axle casting.

Another key development was the growth of Coney Island (Long Island, NY) into a destination for holidaymakers, with so much development happening between 1840 and 1900 that the authorities tried to put a halt to further development so that people would be at least guaranteed to be able to get to the seafront.

Other than the high-profile Big Wheels, the historical development of most funfair rides is more difficult to track, with a continuous evolution between hand-powered, steam-powered and electric swingboats, and the classic fairground caliope undergoing a similar development from the early "Dobbies" to steam and electric systems, with the variety of things that riders could sit on ranging from horses to cars, and even bicycles.