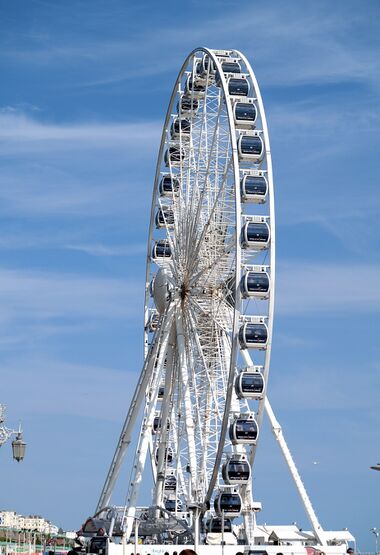 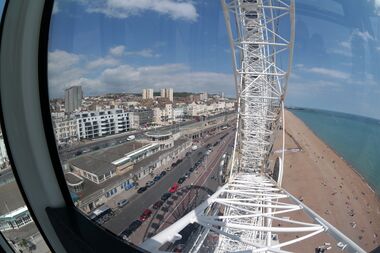 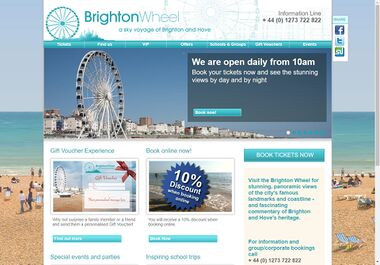 2014: screenshot of the Brightonwheel.com homepage, "A Sky Voyage of Brighton and Hove" [image info] 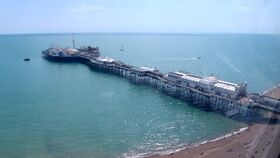 View of Brighton's Palace Pier, as seen from the Wheel. [image info] 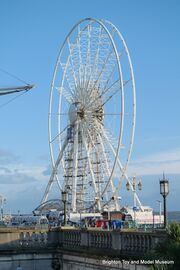 The Brighton Wheel without its pods, during servicing, January 2015 [image info]

The Brighton Wheel was a large temporary Ferris wheel that was built on Brighton Seafront in late 2011, just to the East of the Palace Pier, close to the original location of the Chain Pier, and next to the Volks Electric Railway's Aquarium Station.

The wheel was planned to be in operation for five years, and was duly disassembled in early May 2016 (after which it was replaced by the Brighton Zip).

2014: Panorama looking out to sea, including the Brighton Wheel

Designed to be portable, the wheel was first operated in 2010 in Capetown (South Africa) during the 2010 World Cup, before being taken apart and reassembled in Brighton, in 2011. The wheel as then advertised as being available for sale after its Brighton run finished in 2016.

The working name for the project while under development was The Brighton O. While in Capetown it was promoted as The Wheel Of Excellence, a slightly strange name that was downplayed after its arrival in Brighton (although each pod retained the "Wheel of Excellence" lettering on the outside).

Some journalists initially experimented with calling the wheel "the Brighton Eye", a reference to the Marks-Barfield "London Eye". This wasn't adopted, presumably partly because the Brighton attraction didn't come out well in a comparison with the larger and more impressive London attraction, and partly because the reference would have given the impression that the Brighton installation was somehow associated with or endorsed by the owners of the London wheel (which it wasn't). In the end, the Brighton wheel ended up being called ... The Brighton Wheel, a name that was simple, straightforward and unambiguous (Brighton, oddly, not having any other obvious other fairground-style wheels).

The Wheel's "pods" had windowed doors on either side, on the North side for entry and on the South side for exiting.

The area below the base of the wheel (behind the ticket barriers) had multiple embarkation points that allow several of the wheel's pods to be "filled up" with customers at the same time while the wheel was stationary. Once the wheel had made a minimum of three circuits, it was stopped, and the pod doors on the South side of the wheel were opened to allow riders to disembark and leave. The doors were then shut and the doors on the North side opened to allow in a new set of riders, after which the process repeated.

While the wheel rotated, loudspeakers inside the pods played a commentary by comedian Steve Coogan.

The local response to the Wheel's arrival was not unanimously positive. Some residents complained (entirely reasonably) that plonking a giant ferriswheel almost directly in front of their flats would ruin their view and destroy their privacy, allowing people using the wheel to see in though their windows. Others argued (less reasonably) that this section of seafront was a quiet residential area that would be disrupted by a large-scale tourist attraction. This rather ignored the fact that Maderira drive had always been meant to attract tourists, that historic photos showed it a crammed full of holidaymakers, and that if it was now "quiet" and mostly used by locals, that this suggested a failure to attract audiences that badly needed to be rectified. A third objection was that although the council claimed that this was only a temporary attraction, and was only giving a licence for five years (to avoid conflicting with the already-planned i360), that once the wheel was in place, perhaps its stay might be extended. This third worry didn't materialise: although the owners applied for an extension to the initial five years, an objection from the i360 group meant that there was no realistic chance of this happening.

Although early reactions to the Wheel were mixed - it was seen as being insufficiently original in design (a cheaper, smaller "knockoff" of the London Eye), with tickets that were too expensive, a lot of Brightonians got used to having the Wheel as part of the skyline, and the Wheel outline started to appear in logos as part of Brighton's identity. When it was dismantled in 2016, many Brighton residents felt a sense of loss and complained that this was a scurrilous plan to support the i360 ... some forgetting that they'd also complained about it being installed in the first place.