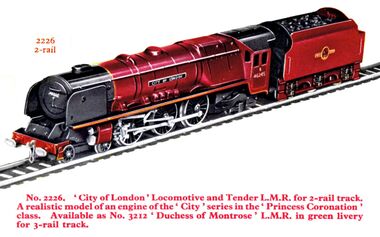 The LMS Duchess Class consisted of locomotives of the 4-6-2 Princess Coronation Class that were either built without streamlining, or that had their streamlining stripped. All the streamlined Coronations were eventually stripped of their fairings and converted to Duchesses, the last being 6243 City of Lancaster, which lost its fairing in May 1949.

The combined Coronation/Duchess Class fleet eventually consisted of thirty-eight locomotives. These were the most powerful steam locomotives on the UK railways, and because they could do "heavy" jobs that even the early diesels couldn't cope with, many of them stayed in use until 1964.

Most of the rest of the Coronation/Duchess class were named after cities (starting with 6235 City of Birmingham), with the exception of the penultimate loco (the last Duchess built by the LMS), 6256 Sir William A. Stanier F.R.S. (1947) (which was named after the designer), and 6244 City of Leeds (1940) (which was renamed King George VI after the reigning monarch, the following year).

All the Duchess locos had consecutive numbers starting from 6220, and were renumbered with gained a "4" prefix with nationalisation (e.g. "6220" -> "46220") with the exception of the very last Duchess built, 46257 City of Salford, which was built after the BR era had started, and therefore always had the "4".

The new chimneys didn't waste so much energy, and gave an additional performance boost, but since they didn't blast the smoke upwards so strongly, the non-streamlined locos then required side deflector plates to stop the smoke drifting back onto the loco and its train, obscuring the view.