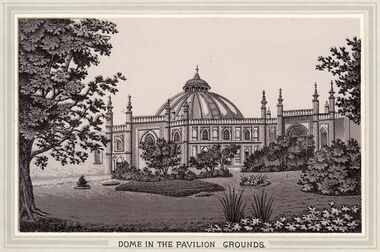 1888 engraving: "The Dome in the Pavilion Grounds" [image info] 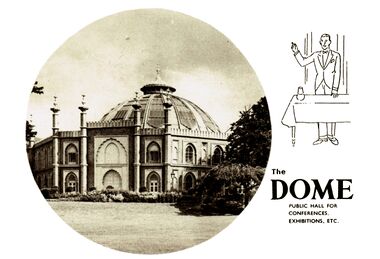 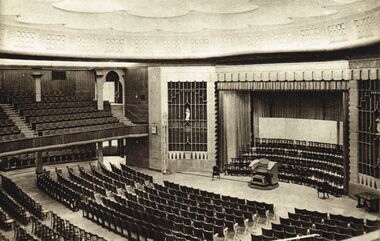 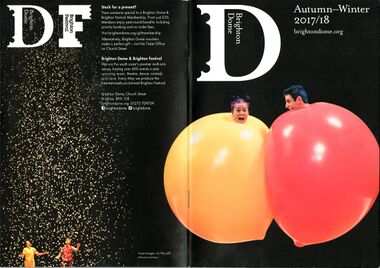 2018: view from within the Pavilion Gardens [image info]

The Brighton Dome was originally built by George IV during 1803-1808 to stable his horses, with the central atrium designed as a space for the horses to be exercised indoors. The design was by architect and designer William Porden (~1755 – 1822), based on the high-profile and influential "Halle aux blés" (Corn Exchange) in Paris, which had been completed in 1783. Although the design was supposed to be modern and scientific, with the dome allowing natural ventilation in summer due to convection, the plan seems to have been a failure, with the space hotter than it should have been during the summer months.

The completion of the stables seems to have spurred George into his Pavilion project, perhaps egged on by the comments of locals that his horses lived in a better building than he did.

The dome was later converted into a public space for conferences and meetings. As part of the redevelopment, the building was extended to include what is now Brighton Museum and Art Gallery.

The original configuration of the dome had it mostly glassed, to allow in maximum light. Unfortunately this also had the effect of acting like a giant greenhouse, which, while probably excellent for growing tropical "rainforest canopy" plants (a la some of the tropical plant houses at Kew Gardens), was not ideal for keeping horses. The uncomfortably high temperature, combined with an omnipresence of horse manure and urine, also meant that the place, allegedly, stank.

The second configuration of the central dome, in the later Nineteenth Century, involved cladding the interior of the dome with elaborate ornamentally geometrically painted shuttering, pierced by a number of roughly flower-shaped windows: the bottom row having large circular windows surrounded by eight smaller circular windows (and a ninth below), and the next row up having a smaller central windows surrounded by four satellite windows. While the space between the shuttering and the glass probably still got hot, the heat was presumably channelled to escape outside before it could percolate into the main space

This was the configuration introduced for the space's conversion into a circular concert hall after the estate was bought by Brighton in ~1850 from Queen Victoria and repurposed as a set of public spaces. Suspended below the centre of the dome was a grand chandelier, which would have caught and reflected the light from the windows during daytime, and was lit by gas lamps at night. Magnus Volk later received a contract to retrofit the chandelier with experimental electric lighting, which was supposed to be especially difficult, because the contract required him to not interfere with the existing gas lighting, which had a tendency to "cook" incautiously-positioned wiring.

This configuration persisted until the 1930s.

In the mid-1930s, Brighton Corporation decides to proudly make over and modernise their public offerings, and decided to revamp the interior of the Dome in the latest art deco style, based on a design by Robert Atkinson (1883-1952). The interior of the dome was filled in with a much shallower convex shape formed by stacked shapes around a central hole (bridged by a tensioned net).

The Pavilion Stables furnish a singular instance of professional whim, far removed from correct taste; and very unsuitable, as the event has proved, for the purpose for which they were designed. They stand at some distance from the Pavilion on the north side; on ground that was formerly a part of the Elm Grove, or Promenade Gardens, which was purchased in 1800, by the Prince of Wales; who, in the same year, bought the Pavilion property; and shortly afterwards, the shrubberies and pleasure grounds belonging to Grove House, an estate of the Duke of Marlborough.*

The principal entrance to these Stables is from Church Street, beneath a lofty arch-way, which conducts to a spacious quadrangular court, surrounded by coach houses, stabling, servants offices, &c. Opposite to this, is another arch, forming one of the entrances to the circular area of the regal Stables, which purport to be designed in the Moorish or Hindoo style of architecture; but are in fact an incongruous mixture of different styles. From the extent and elevation of the building, however, combined with its circular plan, and the lofty arches which open from it towards the four cardinal points, it has an imposing air, approaching to magnificence; and the architectural enrichments are profuse. The exterior is of an octagonal form; but the interior is a circle, inclosing an area of about 250 feet in circumference. This is surmounted by a vast dome from which the whole is lighted by large glazed compartments.

The Stables, sixty-two in number, surround the area; and are so disposed that, when the doors are open, a spectator standing beneath the centre of the dome, may view the interior of every stall without moving from his situation. Over the stables are numerous apartments for grooms, &c. which open from a light gallery, going round the circle. On the south side, a spacious arch, similar to the northern entrance, opens to the Pavilion Grounds; and corresponding arches to the east and west communicate with a Tennis Court and a Riding School: the latter, which is to the west, is 200 feet long, and 50 feet broad.

It was supposed that these extensive archways would sufficiently ventilate the Stables to keep them, even in the hottest weather, of a cool and healthful temperature; yet this effect has not been produced, the quantity of lead and glass that covers the dome, attracting and retaining the heat too powerfully to admit of its being thus dispersed. But few, if any, horses, therefore, are now suffered to be lodged in this circular range of sumptuous Stabling, the expence of which, including the offices, and other buildings immediately connected with them, amounted to upwards of £70,000.

The late William Porden, Esq. was the architect.

Near the Palace is situated the Royal Stabling, decidedly the most magnificent pile ever erected for such a purpose in Europe; octagonal without and circular within, receiving light from a glazed dome, whose diameter is only twenty feet less than that of the dome of St Paul's Cathedral in London.

Into the circular area the doors of the various stables open, containing stalls for about sixty horses: above these are numerous apartments for grooms, &c. The way to the latter is from a light gallery, by which the area, 250 feet in circumference, or thereabouts, is surrounded. The entrance to these stables is from Church Street, through a wide lofty arch into a spacious square court, containing the coach houses, coach horse stables, servants' offices, &c. From this, through a similar arch you reach the circular area, opposite to which is a corresponding arch that opens into the Pavilion grounds. On the east and west side of the circle there are arches of the same kind also, the one leading to a tennis court, &c., and the other to a riding house, 200 feet long, and 50 broad. These spacious arches, at the cardinal points of the compass, are so judiciously contrived for ventilation, that the area and stables are kept cool in the hottest seasons.

, a detached building, formerly the royal stables, was finished in 1802 at a cost of upwards of £7,000. It has since been converted into a concert or assembly hall, having a floor space of 7,000 square feet and capable of accommodating over 2,000 persons. The Dome itself is 66½ feet high and 80 feet in diameter. The magnificent central chandelier, and the eight smaller ones around it, add greatly to the beauty of the hall when illuminated by electric light for evening functions. Concerts on a grand scale are frequently given here, and in inclement weather band and orchestral concerts take place in the Dome instead of in the adjoining grounds. Visitors wishing to see the Dome should apply for passes at the ticket-office in the entrance-hall of the Pavilion.

Redevelopment works are well underway on our Corn Exchange and Studio Theatre to improve your experience at our venues. Along with restoring long-lost heritage features, we are building a creative space, a street-facing café, new bars and public spaces for you to relax and enjoy our iconic Regency architecture.

With 90% funding in place, we need your help to raise £250,000 in public donations to support our grand transformation. [1]