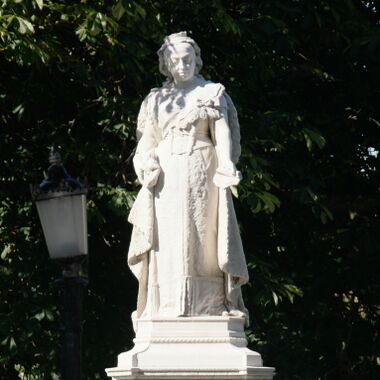 For many years Brighton has been the favoured residence of Royalty, without the influence of which it would, most probably, have still remained what it originally was, a mere fishing village. It has, however, grown up under the shade of our last two monarchs, who have deigned to choose it as the retreat where the cares attendant on their high and arduous station, might for a moment be thrown aside. The inhabitants, therefore, fully aware of the source from whence the prosperity of the town has sprung, were naturally most desirous of knowing, on the demise of his late Majesty, in whom they experienced so kind a patron, whether it would still be their happy lot

to enjoy royal protection. Royalty has always charms peculiar to itself, and to which all ages and countries have rendered homage. On receiving the joyful intelligence that our Queen intended to honour us with her presence, it was resolved to give her Majesty a welcome reception, regardless of expense, and to erect a rustic arch at the entrance of the town and, a triumphant arch and amphitheatre at the entrance to the palace. The amphitheatre, a fine and handsome structure, was about 300 feet in circumference, contained two galleries, the upper one containing three rows of seats, the under one standing places for upwards of 1000 persons. The whole was superbly decorated with evergreens, dahlias, and flags, and had a very imposing appearance. The rustic arch occupied the whole breadth of the road at the entrance of the town, and consisted of an arch 30 feet high, spanning 20 feet, and between two smaller arches erected over the pavements for foot passengers; above the latter were two crowns formed of dahlias, and one of larger dimensions over the centre arch, under which was the inscription "Hail England's Queen", beautifully executed in white dahlias, on a darker ground of the same beautiful flower. It is calculated that there was at least 100,000 persons assembled to witness her Majesty's arrival, the road being lined for several miles beyond the town. Every precaution was taken, by a committee appointed for the purpose, to prevent accidents and preserve order, and by whose laudable activity the road was kept clear. Shortly before half-past four, it was evident the Queen was approaching the town, the royal standard being hoisted on the top of St Peter's church, the preconcerted signal: the appearance of its broad folds was immediately succeeded by a discharge of canon and ringing of bells. On her Majesty's arrival at the rustic arch, the greatest loyalty and enthusiasm were manifested by the crowd, which her Majesty acknowledged by her remaining under the arch during the singing of the national anthem, and repeatedly bending to the spectators. After the royal cortègé had passed through the arch, a detachment of the carabineers took their station abreast beneath it, thus preventing the immense rush which would otherwise have taken place. The scene was animated and pleasing in the extreme, the appearance of the military, the sound of music and singers, the neighbouring houses and temporary erections filled with spectators, and decorated with laurels and flowers, and above all the presence of our youthful queen, constituted a scene seldom surpassed. As her Majesty approached the amphitheatre the scene became exceedingly interesting; the tide from the extremities of the town set in with almost irresistible force towards this building, and the pressure increased every moment: the coast guard, police, and dragoon guards had extreme difficulty in keeping the crowd back, but shortly after the barriers were partly removed, so as to permit the stream to pass through the theatre, and the living mass poured along for nearly an hour. It consisted of persons of every grade of life, from those dressed in the first style of fashion, to the humblest labourer. The view from the tower of the old church was sublime; it commanded a bird's-eye view of the sea, the palace, the amphitheatre, rural arch, nearly the whole line of procession, and the vast accumulation of carriages along the London road. Her Majesty was received in the palace grounds by General Sir G. Quentin, and alighted on the lawn, when the band of the carabineers played the national anthem.

In the evening the illuminations throughout the town were upon a grand and expensive scale; nearly every house exhibited some device or motto.