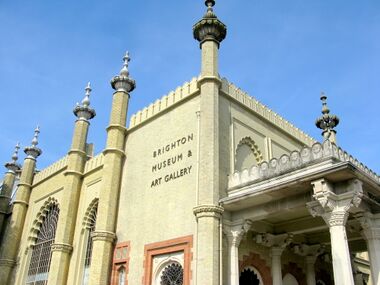 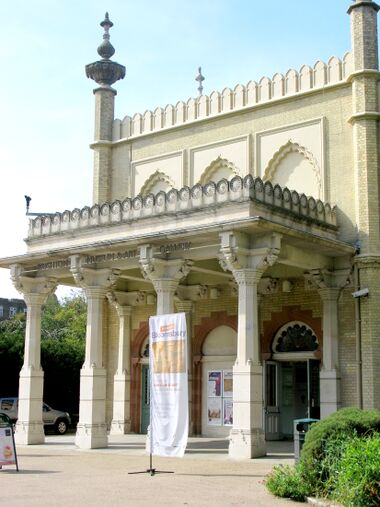 The museum introduced admission charges for non-residents in May 2015 in an attempt to cut costs. The main body of the museum is free to local residents, with the exception of special temporary exhibitions on the first floor, which usually carry an admission charge.

In 2016, the museum replaced part of the entrance lobby shop space with a coffee shop.

The Royal Pavilion and Brighton Dome complex has hosted museum and gallery displays almost since its original acquisition for the town by the Commissioners in 1850, with displays being held in the Great Kitchen from the early 1850s, and a museum of sorts being set on on the first floor in around 1859.

With the upper-floor display space awkward to navigate and less than ideal for large exhibits, the town decided to create a dedicated museum and gallery space on the site, by building an extension to the Stables complex. This part of the Pavilion complex site had originally been open space, divided off from Church Street by a wall, and used for miscellaneous purposes such as exercising horses.

Plans for turning the area into tennis court(s) never came to fruition, and the site was transformed by Philip Lockwood into a natural extension of the existing Dome and Corn Exchange frontage, with the entrance to the new Museum and Art Gallery on Church Street, with a small entrance lobby opening onto a bright picture gallery. The new museum building got excited reviews in 1872, and appears to have first properly opened to the public some time around 1871-73.

By 1876, this new use of the buildings was well established, to the extent that questions were raised as to whether the funding of the ongoing displays via local rates were strictly covered by the 1850 Act (which had allowed for the use of the site for educational and scientific purposes, but hadn't dealt with the idea of a permanent museum or gallery). The subsequent 1876 Act explicitly legitimised the funding of the Museum and Art Gallery, and also relaxed the restriction of paid use for the rest of the building, so that ticketed concerts and events could be held in the recently refurbished Dome.

And whereas the Corporation have, at their own expense, adapted part of the Pavilion Estates for, and have therein established a free library, museum, and picture gallery, the expense of maintaining which has been defrayed by the Corporation out of the rates levied by them under the Acts of 1850 and 1867, but doubts have arisen whether the establishment and maintenance of the said library, museum and picture gallery are purposes for which such rates are legally applicable, and it is expedient that such doubts be removed:

The building's use further increased with the opening of a Lending Library in 1889, and with the vacation of part of the building by other council officials it was decided to remodel and expand the space, with the new Borough Surveyor F.J.C. May 5th redesigning the interiors with Eastern motifs and geometrical tiling reminiscent of mosque decoration.

This institution is in Church Street, adjoining the Dome, and the style is in keeping with the Pavilion. Originally erected in 1873, the buildings were reopened in 1902, after reconstruction and extension, at a cost of £50,000.

A recent acquisition, of which Brighton is proud, is the Henry George Simpkins Bequest of pictures, displayed in a room adjoining the Exhibition Galleries.

Elsewhere are Zoological and other- collections, including one illustrating "Old Sussex."

Brighton got a far bigger central library with the opening of the Jubilee Library in 2005, and the old library space above the museum became Brighton History Centre, archiving research material related to the history of Brighton.

With the planned opening of The Keep, the History Centre in turn became redundant, and closed from 1st April 2013 for the transfer of its holdings to The Keep, which opened its doors in November 2013.

The History Centre space was repurposed again in Spring 2015, becoming the Museum and Art Gallery's Museum Lab, a multi-purpose space typically split into a cordoned-off curatorial office space and restoration space, and a general-purpose space for supervised "hands-on" public activities.