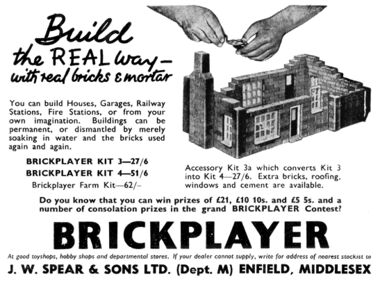 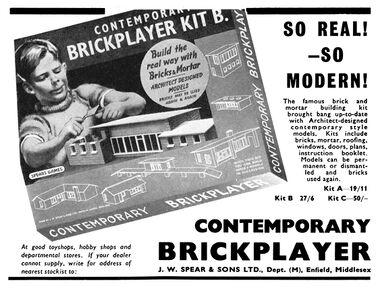 Brickplayer, 1938, (and Contemporary Brickplayer, 1959) marked the entry of boardgame company Spears into the "artificial stone-based building construction set" market, the name being a combination of the words "bricklayer" and "play".

Spears' "angle" was to use smaller bricks that more closely approximated real building bricks, rather than the massively-proportioned blocks used by Lott's Bricks. The resulting painstakingly-assembled buildings were prone to being wrecked if they were knocked - Spears' answer being to have the user glue the bricks together using a special mortar, which could be removed later by immersing the entire building in water and leaving it to soak.

Although well-advertised, and presumably popular with parents working in the construction trade, Brickplayer (and Contemporary Brickplayer) probably suffered somewhat from parents' apprehension over the possible amount of mess involved, either in building the sets, or soaking away the mortar.

More adventurous Brickplayer fans were liable to try double-sided sticky tape for permanent models, and to experiment with alternative temporary "mortars" such as porridge, icing sugar and toothpaste.

" Exciting Contemporary Brickplayer enables you to build modern!. It's the famous Brick and Mortar Building Kit brought bang right up to date. New models are architect-designed to '0' gauge scale. Kits include bricks in all required shapes, mortar, roofing, windows, doors; plans and instruction booklet.
Models can be permanent or dismantled by merely soaking in water and bricks used again and again. "