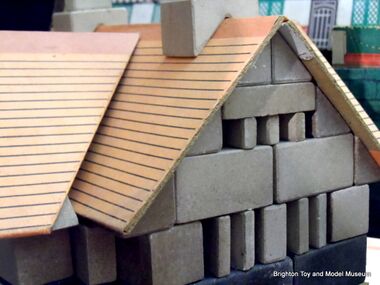 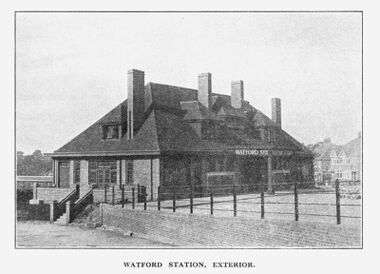 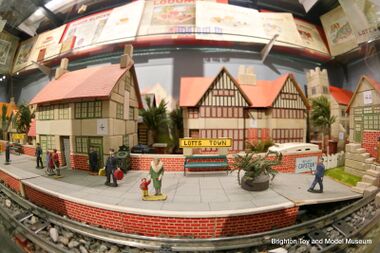 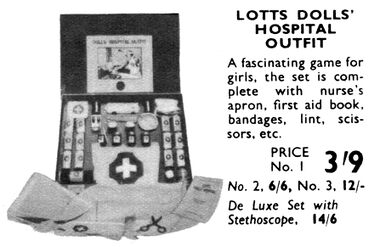 Watford-based Lott's (are best-remembered (in terms of unique products) for their Lott's Bricks range of building sets, but they also produced chemistry sets and "electricity" sets. In later advertising, the name tended to be spelt "Lotts", without the hyphen.

The Lotts Bricks block-sets were designed for the company by Arnold Mitchell (1863-1944), and the early sets carried the tagline, "DESIGNED THROUGHOUT BY ARNOLD MITCHELL, Architect".

Mitchell had rapidly risen through the ranks of successful architects in the late C19th with a succession of buildings in the Arts and Crafts architectural style, which featured natural-looking textures and stylings reminiscent of low-tech rural buildings such as barns, often with large steep-sloped roofs extending down to comparatively low level, giving the appearance of a robust but unsophisticated construction.

" There are perhaps few architects to whom success has come so rapidly and so early as to Mr. Arnold Mitchell ... In Mr. Arnold Mitchell's domestic work, which is all this article proposes to touch upon, the chief reason for his success is not far to seek. He is essentially a convenient and happy planner. His designs for houses, be they large or small, have a quality of " homeyness " and common-sense (a quality ofttimes sadly lacking in men with big reputations) ... "

Michell went on to win the Daily Mail Ideal Homes Exhibition prize in 1912 for his design for a £500 house, and was probably an obvious choice when E.A. Lott decided to produce sets of stone building blocks as "house" sets, circa 1915.

Michell's classic design was his four-gabled country house, a version of which then became the classic "Lott's Bricks house featured on boxlids and in the Lotts advertising, but it's also worth tracking down images of Mitchell's "Royal Cottage, Royal Villa and Golf Pavilion", which looks like a classic Lott's Bricks house with a simple Lott's Bricks forecourt.

Mitchell's designs essentially defined the look and character of Lott's Bricks, and scored points for the company on at least three fronts:

Coincidentally, the best-preserved urban example of the high-roofed "Arts and Crafts" style is supposed to be Lott's' local Watford Station, now a listed building and regarded as the quintessential nostalgic-looking "Metroland" railway station. Although the station looks startlingly like a Lott's Bricks building (apart from the non-gabled ends), it was actually built in 1925, and designed by Charles Walter Clark.

Although Lott's Stone Puzzles were referred to in the plural, the advertising that we've found so far only seems to show a single stone puzzle "Butterfly" with variations in packaging. This was basically lifted from one of the many Richter "Anchor Blocks" puzzles, German intellectual property rights having been suspended during the War, and removed after Germany surrendered.

The following 58 files are in this category, out of 58 total.