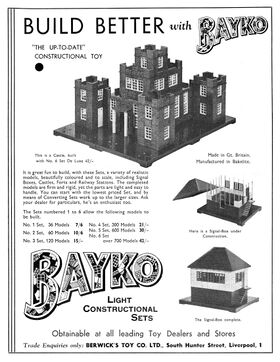 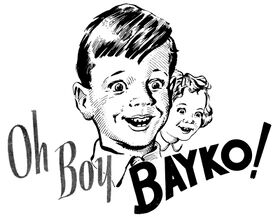 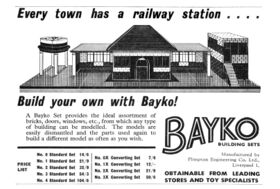 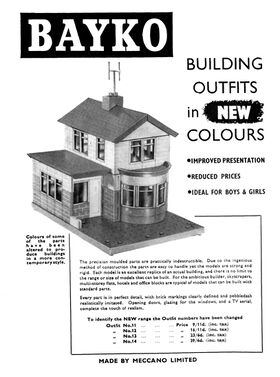 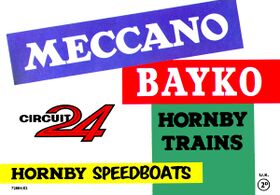 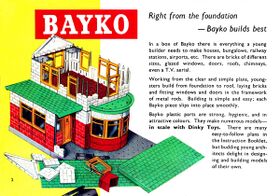 The name is widely assumed to be a reference to "Bakelite", the early plastic material that its plastic parts were originally moulded from, but might also be related to the name of the larger Dutch wooden predecessor system that also involved panels and posts and a pierced baseboard, "Mobaco".

Bayko was widely respected due the the accuracy and finish of the resulting model buildings, and still has many adult fans who mourn its passing. There is still a thriving Bayko modelling community who exchange and sell spare parts, and who show Bayko buildings at model exhibitions.

Bayko was devised by Charles Bird Plimpton (1893-1948) during a long spell convalescing from tuberculosis ("TB"). Plimpton's period in the sanatorium left him with a lot of free time to decide what to do when he got out, and as a Liverpudlian, he can't have failed to notice that Meccano was very very successful. But how could one create a new construction toy that wasn't Meccano? The Dutch "Mobaco" system used a combination of baseplates with holes and wall and floor panels slotted between vertical wooden beams, and if this system could be refined and miniaturised so that it could be smaller and cheaper, using the new plastics, then this might be something that could be cheaper, more visually attractive, less cumbersome, and patentable.

Plimpton returned to normal life in 1933, and promptly got patent, set up Plimpton Engineering, struck up a friendly relationship with the Bakelite company, and released a range of five sets, 1-5, with upgrade sets also available (similar to the sales model previously used for Meccano sets.) The system was promoted as washable and hygienic, and therefore ideal for the sickroom (perhaps reflecting Charles Plimpton's own experiences). 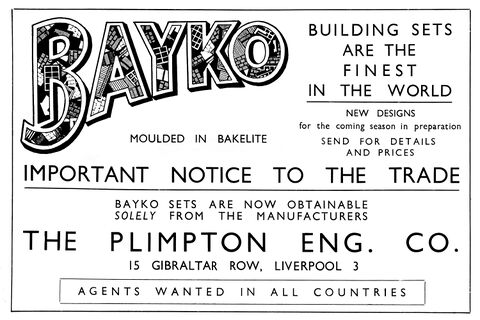 Originally available in brown and white with green window frames, Bayko added ornamental pieces in a separate addon pack, brought out a new Set 6 which included the new pieces, and then migrated everything to a new more brightly-coloured red, white and green "new series" colour scheme shortly before WW2.

Plimpton patented some designs for new Bayko pieces after the war, but died in 1948 before they could be put into production. The company continued independently for another ten years under the control of Charles' widow, Margaret, rationalising the number of sets while introducing the new pieces. With a good, stable, mature set of designs, an enthusiastic userbase and and good sales, the range didn't change much in the late 1950s, and Margaret decided to sell the company to Meccano Ltd., in around ~1959/60.

Although the idea of Meccano Ltd owning Bayko may have seemed like a good one - Meccano Ltd was a manufacturing giant with its own magazine and distribution, and a metal-based product range that badly needed to gain knowledge of plastics manufacture – the transition effectively killed off Bayko.

Plimpton Engineering had already started trying to migrate some of the pieces from Bakelite to more modern (and cheaper) plastics, and while this process continued under Meccano Ltd, the ML engineers seem to have regarded Bayko as a useful testbed for developing their plastics knowledge, taking the product off the market for a year while they tinkered and reengineered it, after which the company's marketing department seem to have had rather less enthusiasm for actually selling the results, with Bayko advertised as a stand-alone product rather than as a useful (and now cheaper) system for making buildings that, for instance, worked well with Dinky Toys and other parts of the Meccano Ltd inventory.

At this point, Meccano Ltd. were having their own problems, and were taken over in 1964 by Lines Brothers,with Bayko being a casualty of the product line rationalisation. Lego was by now making serious inroads into the UK toy market, and those at Binns Road and/or Lines Brothers in charge of strategy seem to have decided that what they needed was a more modern system much more like Lego, launching their Lego-lookalike "Cliki" in late 1964.

If the company were making Cliki their new plastic construction system, it didn't make much sense to be supporting an older and incompatible system, so the arrival of Cliki pretty much meant that Bayko was now dead and buried (with advertising for Bayko already having stopped some time before the Cliki launch).

Ironically, Cliki then had to be withdrawn for infringing on the Lego company's intellectual property rights, and many Bayko enthusiasts never forgave Meccano Ltd for (as they saw it) having bought up Bayko just to "faff about" with the product and then kill it off.

The museum displays include four built Bayko models and a variety of boxes.