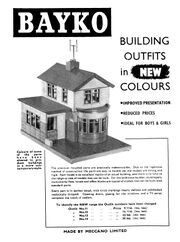 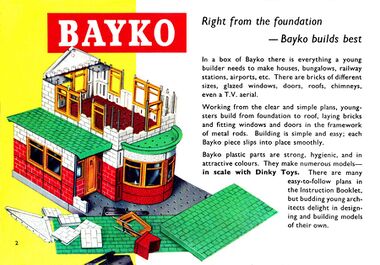 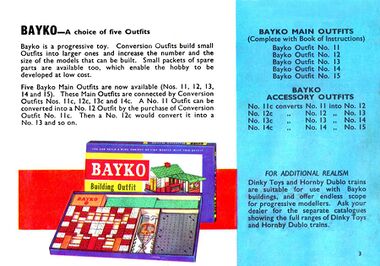 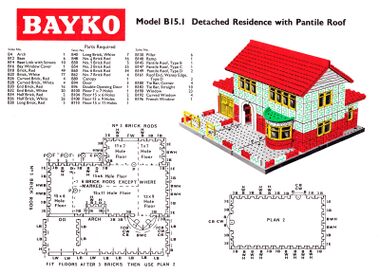 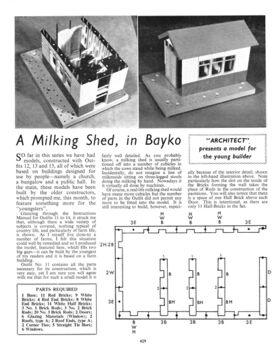 Some Bayko fans have accused Meccano of buying the company just to shut it down and remove a competitor, but the reality seems to be more complex, as once they'd acquired Bayko, Meccano Ltd. set to work creating new parts, retooling old parts (sometimes apparently unnecessarily), completing the migration to newer, non-Bakelite materials, introducing new colours (notably some cheery yellow windowframes), and new sets.

It's possible that the acquisition of Bayko might not have been part of any masterplan – Plimpton's widow had been running the company for ten years, the product was beginning to stagnate, and she might have decided that this was a good time to sell up, retire with a decent amount of cash, and leave her husband's product in the hands of a large company who'd have the resources and energy to continue developing it. From Meccano Ltd.'s point of view, if the Bayko company was available it probably made more sense for them to own it than a competitor, and if they had to promise to update the range, well, they had engineers who could probably benefit from experience of working with plastics in the context of an actual product line.

Whatever Meccano Ltd.'s initial motivation was for taking on Bayko, they did put a fair amount of work into re-engineering the product, with a new product line of five redesigned sets, new instruction manuals, new building designs, and a new logo - a bold typewriter-style font with strong serifs that was closer to the "Meccano" logo (but with taller, thinner letters, and without the Meccano logo's distinctive slanted hole in the "O").

Meccano Ltd also sold "small packets of spare parts", and there were four "convertor" Bayko Accessory Outfits, 11c-14c, which upgraded a set's contents to match those of the next set up, so an "Outfit 11c" set added to an "Outfit 11" set would give the same contents as an Outfit No.12.

The precision moulded parts are practically indestructible. Due to the ingenious method of construction the parts are easy to handle yet the models are strong and rigid. Each model is an excellent replica of an actual building, and there is no limit to the range or size of models that can be built. For the ambitious builder, skyscrapers, multi-storey flats, hotels and office blocks are typical of models that can be built with standard parts.

Every part is in perfect detail, with brick markings clearly defined and pebbledash realistically imitated. Opening doors, glazing for the windows, and a TV aerial, complete the touch of realism.

Colours of some of the parts have been altered to produce buildings of a more contemporary style.

In a box of Bayko there is everything a young builder needs to make houses, bungalows, railway stations, airports, etc. There are bricks of different sizes, glazed windows, doors, roofs, chimneys, even a TV aerial.

Working from the clear and simple plans, youngsters build from foundation to roof, laying bricks and fitting windows and doors in the framework of metal rods. Building is simple and easy; each Bayko piece slips into place smoothly.

Bayko plastic parts are strong, hygienic, and in attractive colours. They make numerous models – in scale with Dinky Toys. There are many easy-to-follow plans in the Instruction Booklet, but budding young architects delight in designing and building models of their own.