From The Brighton Toy and Model Index
(Redirected from Mobaco)
Jump to:navigation, search 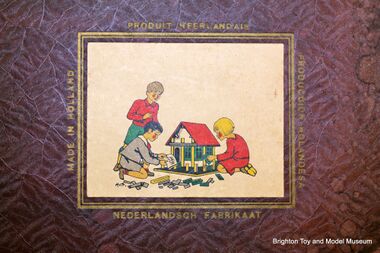 Mobaco sticker used on the lower-left corner of the box lid, showing an illustration of three children using the system to build a model house. The sticker is surrounded by the text "MADE IN HOLLAND" / "NEDERLANDSCH FABRIKAAT" / "PRODUIT NEEDLANDAIS" / "PRODUCCION HOLLANDESA" [image info] 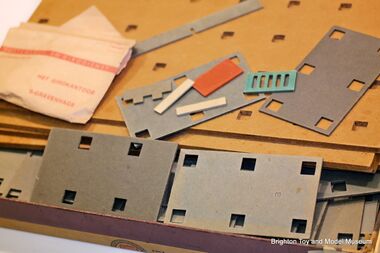 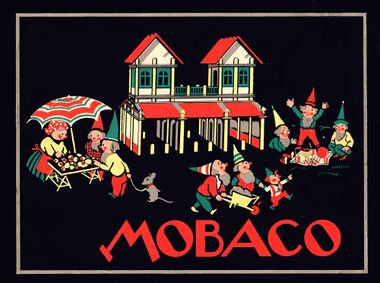 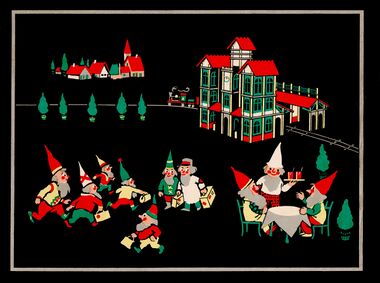 Back cover of the manual, showing gnomes in front of a railway station [image info] 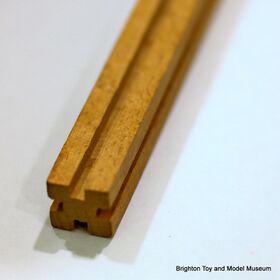 The Dutch-made Mobaco architectural construction sets appeared in the 1930s, and were made of wood and treated, hardened cardboard.

The system consisted of upright beams inserted into a sturdy baseplate, between which wall and window elements could be inserted.

The main component of the Mobaco system was a set of square hardwood rods with grooves cut into all four flat faces. These were inserted into a series of baseplates, after which wall, door and window elements could be slotted between adjacent rods.

Floor panels (with suitable square cutouts) could then be lowered over the rods to rest on the wall elements, and the process repeated for further floors of the building. Rods were supplied in various lengths according to the number of floors that they were supposed to span.

For flexibility, floor panels came in a variety of rectangular shapes many fairly small), and could be "paved" over a lower floor. Since this piecemeal approach to floorbuilding would tend to make for wobbly buildings, Mobaco's designs assumed that each floor would use a double-layer of floor-plates, overlapped for rigidity. Angled red roof plates could then be used on the top floor(s) to create sloping roofs and towers.

Mobaco's uprights were made of hardwood.

Although the floor and wall elements are often described as being "cardboard", the pieces were hardened and possibly chemically treated - when two pieces are tapped together, they make an almost ceramic-sounding "chink" sound, so it's possible that they might have been impregnated with phenolic resins or some early plastics, and/or heat-treated.

Mobaco's manuals were extravagantly large-format, possibly due to the need to be able to produce complex building plans at a large enough sale to be easily legible. Since the plans were (hopefully) self-explanatory, the manuals didn't include any text other than the company name, which meant that they didn't need to be translated and reprinted for export to other countries. 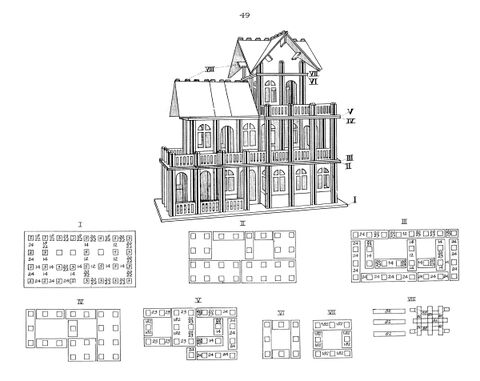 Page 49 of the manual, for the construction of a model building, showing a line drawing and floor plans

I can tell you the following about MOBACO. It was my great uncle NICO Gerritsen who designed the Mobaco. The factory 1921 was in my home town ZEIST where two men started Mr. C.W. Bal and Mr. Pieter van Mouwerik. The M is for Mouwerik, the B is for Bal and the CO is (Ni)co. So the CO is not from the word Company.

My great grandfather set up a cutlery diamond and silver factory in Amsterdam. He was a silversmith. One of his sons was Nico, who helped with his other brothers in that factory and learned very young everything about materials.

The factory moved to Zeist and after Nico has been married the young couple went to Brazil, where he developed a waterdwell for the poor people in the woods but his wife could not bear the damp temperatures and was homesick and pregnant so they returned to Zeist, where Nico's brother has started a factory in plate, silver, forks and knives while my great grand father went on making silver and golden jewellery in his factory. Nico helped then his brother Marius, my grandfather in his factory.

Nico was more an artist then making money. My great grandfather and grandfather Marius and Mr. Pieter van Mouwerik with his wife lived opposite each other in the same street. So everybody knew each other.

Nico designed and developed the Mobaco. His first models were made with matchsticks!! You will understand that the youngsters loved to visit this uncle! Mr. Bal and van Mouwerik made the MOBACO in their factory.

There are several Mobaco collectors in my country and they came to me to have details from out my archives. In auctions it is still expensive. Emigrants took it to the New World and there you sometimes will find it.

Later on Nico's brothers installed for him his own jewellery shop, but he did not like the business. He died when he was 47, suddenly and his wife with 5 children had to do the shop in very difficult circumstances.

There is a site in English where you can find more details.

Mobaco may have inspired the smaller-scale plastic Bayko architectural sets produced by Plimpton Engineering in England, in which wall elements slotted between thin metal rods, inserted into a baseplate. Since Charles Plimpton came up with the idea for Bayko while he was in a sanatorium suffering from TB, and developed the system while recovering, it would be interesting to know whether the sanatorium had a Mobaco set to help guests pass their time in recovery.