The model (along with a poster for the railway) forms part of the Museum's "Glamour of Brighton" exhibition, and is often a conversation-point with visitors. 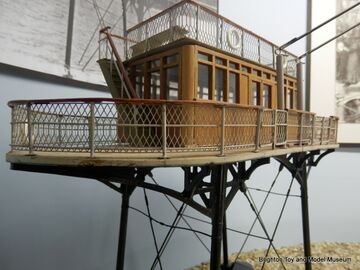 The "Pioneer" car was the world's first (and very probably the world's only!) seagoing electric railway, and was constructed like a cross between a mobile pier section and a tramcar. For stability, the car had four spread legs with shrouded bogies to clear away any pebbles or other small obstructions on the tracks, and it ran on two parallel sets of conventional-looking two-rail track. The engineer who worked on Pioneer went on to design the Brighton Palace Pier.

For health and safety purposes, the seagoing Pioneer was classed as a ship or boat, and therefore had to carry a lifeboat, even though it had no chance of sinking.

The Pioneer's wheels were driven by long driveshafts that ran down the centres of its four tubular legs, and the vehicle received power from overhead cables, with the return circuit provided by the metal track (and also to some extent by the seawater, giving nearby swimmers a distinctly tingly experience).

The Pioneer's two sets of tracks were 2ft. 8 1/2" gauge, and were set eighteen feet apart. Overhead power was provided at 500 Volts, which drove four 25-horsepower electric motors, one for each leg, with the driveshafts running down each leg coupling to the wheels via large bevel gears. 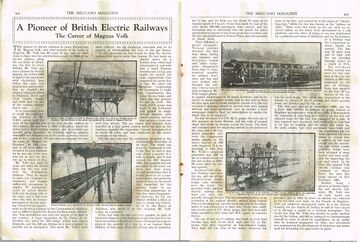