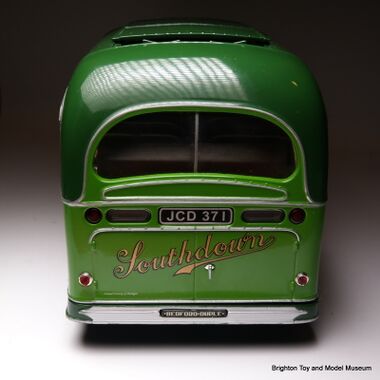 The superb model has its original cardboard box and packing. The box is mostly purple with yellow and white text, and a yellow background behind the model title, which contrasts with the picture of a cream "Royal Blue" version of the model (a sticker then qualifies this by saying "This box contains Southdown JCD 371".

" The superb BEDFORD DUPLE OB COACH DIE CAST MODEL is available from ORIGINAL CLASSIC. Produced to 1:24 scale, this unique model WITH ROOFLIGHTS is packed with detail and features which include – working lights to the front, rear and interior. The inside contains lavish finishing touches comprising patterned upholstery, footrests, ashtrays, clock, mirrors, window winders and even a welcome aboard sign!
The iconic Bedford OB is recognised as a real classic amongst British coaches and the ORIGINAL CLASSICS model captures this faithfully... in every detail! "

The Bedford OB appeared in 1939, just before the outbreak of World War Two. Although only a two-digit number were produced before the war halted production, the design was a classic, and after the war ended over twelve thousand were produced.

The manufacturers and bus enthusiasts tend to refer to the bonnet shape as a classic "bullnose", but the bus' curves and bulbous "high forehead" meant that to people who grew up with the bus, it was a "piggy" bus.