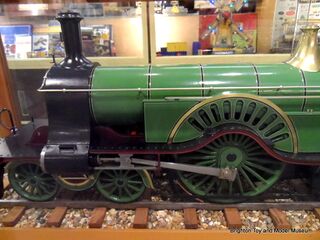 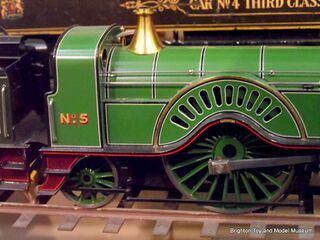 Designed by Patrick Stirling for the Great Northern Railway, the Class No.1 4-2-2 locomotive with its single eight-foot pair of drive wheels became known as the Stirling Single, and the locos were also referred to as "eight-footers".

Fifty-three of the locomotives were built between 1870 and 1895 at Doncaster Works.

Apart from the single large drivewheel with "paddlesteamer"-styled wheel guard, unusual front profile, and short curved cab roof, the "Singles" also stood out for their protruding front bogey, which at first sight appeared to serve no obvious purpose. Since the large drivewheels raised the loco's centre of gravity, this protruding bed and bogey helped to lower the locomotive's overall centre of gravity, and improved the loco's stability on the track.

In the "Thomas and Friends" children's series, the comparatively recent character of "Emily the Engine" is a Stirling Single locomotive.