The piece was introduced as "NEW!" in a 1963 Hornby Dublo catalogue, along with its counterpart number 4070 in crimson, and appeared in Meccano Magazine in April 1963. 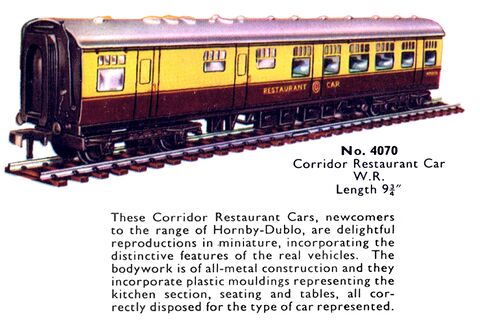 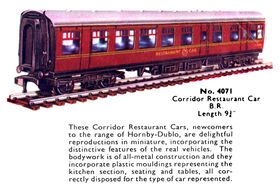 " It is some time since I had details to give you of any new passenger-type rolling stock, so that it is with special pleasure that I am now able to tell you about the two new Restaurant Cars listed under Nos. 4070 and 4071. You will recall the revision in Hornby-Dublo passenger coaches that took place some time ago, leading to the appearance of the now familiar corridor coaches representing B.R. standard practice. The new Restaurant Cars incorporate similar features, and like the Corridor and Open vehicles already in service on many layouts, they, too, represent standard stock.

In their construction the cars have been brought into line with the style of construction standardised in Hornby-Dublo coach building practice. A wealth of detail is provided with the moulded roofs, end and underframe sections. The bodysides, bases and bogie frames are, like the real ones, of strong metal. They run on the standard Hornby-Dublo Nylon Wheels, so that their easy action when on the road is ensured. Moulded couplings, as now standard, are fitted. Interior furnishing and features are, of course, incorporated, these being attractively represented by plastic moulding that provides the table tops and the seating on either side of the passage through the restaurant section. As in the real vehicles seating is arranged so that there are pairs of seats on one side of the gangway, with single seats to the smaller tables on the opposite side. At one end of the car the section representing the kitchen and pantry is partitioned off where the centre passage becomes a side corridor. Windows are glazed with transparent plastic, except those in the kitchen section, where obscure glass is the rule in real practice.

The special character of the vehicles as compared with ordinary Corridor Coaches is denoted by the roof and underframe details. There is a representation of the normal torpedo ventilators along the passenger section, but at the busy end of the vehicle, where the kitchen and pantry are situated, circular shapes simulate the fans that are so necessary in the actual Coach

Apart from the interest of the traveller in the amenities provided in the Restaurant Car there is something fascinating about their special character that appeals to the enthusiast. To the massive fans and obscured windows, one must add the underframe detail To the massive fans and obscured windows, one must add the underframe detail so convincingly represented in the new Hornby vehicles. These incorporate the underframe girders that help to form what is in effect the backbone of the real coaches and there are the brake cylinders and the "V"-shaped brackets that carry the brake shafts in real life. Also, on the kitchen side of the car, are represented, first, a casing which houses the compressor used for lifting water from underfloor tanks to kitchen level, then, all in a row, the containers used for cooking purposes, and the casing of the lighting dynamo. On the opposite side the fittings represented are mainly of an electrical character. Lighting is specially important in a Restaurant Car, so the relatively massive character of the battery boxes will not surprise you. Among other underfloor items to intrigue you is the section of moulding – just below the central door on this side of the vehicle – that represents the refrigerator and bottle cooler boxes. A Restaurant Car has to be in effect a self-contained hotel on wheels.

The new Restaurant Cars are available as No. 4070 in W.R. brown and cream livery and as No. 4071 in B.R. maroon. In each case appropriate running numbers appear on the bodysides, together with the wording "Restaurant Car" and the B.R. emblem. The B.R. classification of the real vehicles represented is R.U., which stands for Restaurant Car Unclassed – in other words, first-class or second-class passengers can be accommodated. If additional seating is required it is often the practice to run an open coach of either class next to the Restaurant Car and this practice can readily be followed in Hornby-Dublo. This is, in fact, precisely the situation shown in one of this months pictures in which the new cars appear. The open coaches, in Hornby-Dublo are therefore very useful vehicles, carrying the seating and double accommodation required for such purposes. I can foresee a strong demand for the new Restaurant Cars on the part of Hornby-Dublo owners who want to cater for the needs of their "hungry passengers" on long-distance services.