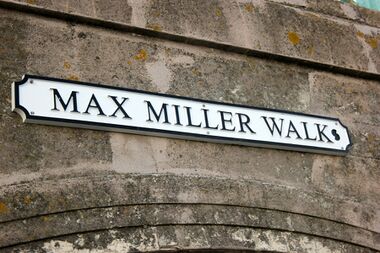 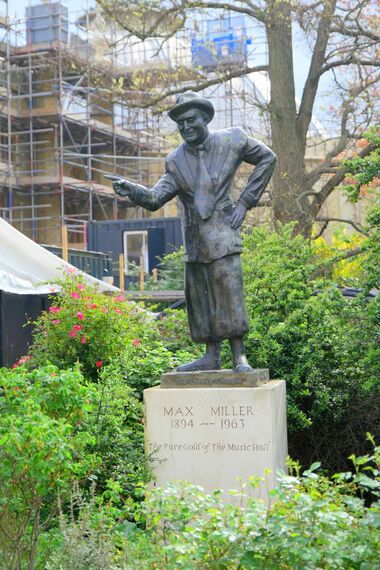 Thomas Henry Sargent (1894 – 1963), better known by his stage name Max Miller, was a Brighton-born music-hall comedian who became Britains most famous and most highly paid stage humorist. Miller had been part of a double-act with his wife Kathleen, but she pulled out on the grounds that she considered him to be funnier as a solo act.

Miller's main stage persona was of a flamboyantly extrovert, sexually active travelling salesman or trade rep with a girl in every town, and his act revolved around a steady stream of sexual innuendos and "bar talk". This may have been somewhat at odds with his long-term marriage to Kathleen.

In an age when the content of musichall acts was subject to intense scrutiny and censorship, Miller offered his audiences the prospect of seeing a "naughty" act that teetered and danced at the very edge of legality. Miller continually strove to find new ways to allude to words and acts that could not be spoken of out loud, and brought his "white book" and his "blue book" of material on stage with him, asking his audience whether they wanted the "clean" or the "blue" material. Inevitably, the audience always clamoured for the "blue" jokes.

Typical of Miller's material was the use of suprisingly sophisticated double-entendres ("It's all clever stuff, no rubbish!") that, in a transcript, might be capable of passing by a censor's scrutiny without being spotted, and poems, songs and rhymes that ended with an obvious forbidden word or word referring to a forbidden act, which Miller then never actually spoke ... suddenly stopping and switching to another subject just as the inevitable censor-violating word was about to appear. The theory behind this was that Miller could not be prosecuted for words that he had never actually spoken, and the audience loved it.

This use of "the assumed but unspoken" probably reached its high point with accounts of Miller opening his act by appearing on stage in his trademark white suit with coloured flowers, and silently miming camp behaviour to the accompaniment of the band for perhaps five full minutes, before turning to his audience and challenging them with the declaration "What if I am?", causing the gleeful audience to erupt ... Miller could bring the house down with minutes of silence followed by a single four-word sentence. This was deeply dangerous material at the time, and theatregoers loved Miller's mastery of "the edge" and his willingness to take risks for them, and also loved the sense of intimacy and camaraderie invoked by Miller's "We're all friends here, we all know what's what" attitude. Buying a ticket to a Max Miller show meant that one was complicit in an exciting conversation that brushed against taboos and created a sense of solidarity with the other audience members.

The anthithesis of the desperate Archie, Miller never needed an audience to make him feel fulfilled, and said that he wasn't particularly obsessed by showbusiness – he simply happened to be good at it, and the money was good. And having amassed enough money to retire in comfort at the top of his game (and before television destroyed the audience for music-hall), he rather liked being able to spend time on his nice boat, fishing, and holding parties.

Miller is commemorated by the naming of the walk above Madeira Drive as "Max Miller Walk", and the putting-up of a statue to Miller in Pavilion Gardens.

Britain's top 'stand-up' comedian in the 1930s, 40s and 50s, Max was born in Brighton where he lived all his life. Known as 'The Cheeky Chappie', Max also starred in films and revues, and wrote and sang his own distinctive song, 'There'll Never Be Another'.