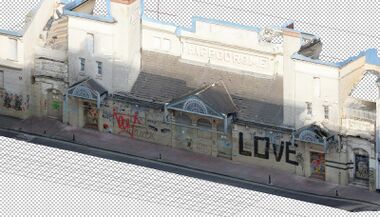 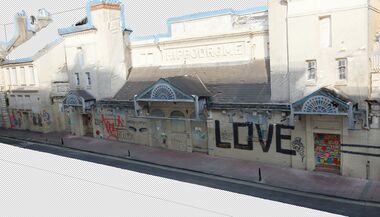 Brighton Hippodrome in Middle Street, The Lanes, started like as the Real Ice Skating Rink in 1897, and was converted into a circus in 1900 and relaunched in 1901 as The Hippodrome. The site has been unused since 2007.

The building features a large low-domed roof and occupies an area of land back from the road that goes back roughly the same distance as the width of the frontage.

While the building still stands, it is now showing increasing signs of dereliction – it is on the "at risk" register, and apparently people have had difficulty in contacting the Guernsey-based owners to find out what's actually going on.

The building's design was created by architect Lewis Karslake, with theatre architect Frank Matcham employed to redesign the interior for the 1901 relaunch. The circus was also not financially successful, and the building was sold on, the ring replaced with additional seating, then the venue relaunched once again in 1902, as a theatre.

Performing artists who are supposed to have "trodden the boards" at the Hippodrome include:

The Beatles and The Rolling Stones also both played the venue in 1964.