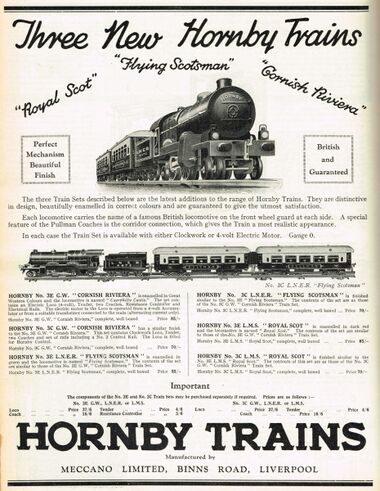 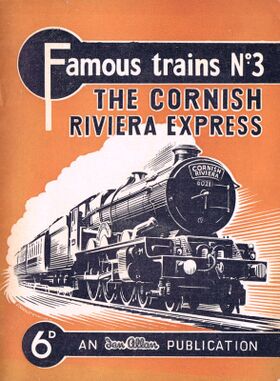 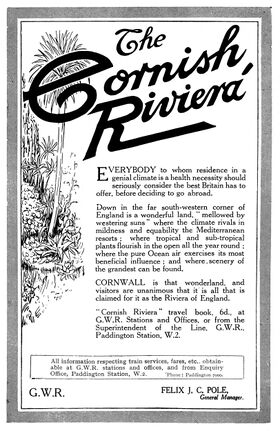 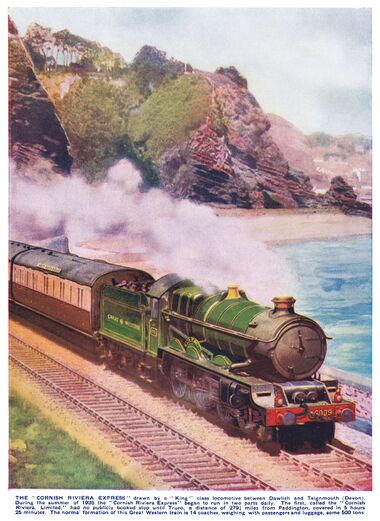 The Cornish Riviera Express was the late mornng express service between London's Paddington Station and Penzance, Cornwall. The train was heavily promoted by the Great Western Railway in order to ingrain the idea of taking holidays in Cornwall into the minds of the British public – why holiday abroad when you could holiday in balmy Cornwall? And of course, if you wanted to visit Cornwall, the only way to get there by train was by using the GWR ...

Although the GWR had previously been running fast services to Cornwall since the 1860s, a public rivalry flared up with the LSWR over timings on other routes, where the LSWR had more direct routes, and the GWR was being mocked for its more circuitous routes, with "the GWR" supposedly standing for "the Great Way Round".

This caused the GWR to become acutely focussed on being able to claim fast journey-times, and the new service with limited stops was launched in 1904, with (as a additional public relations move) the name being based on the winning entries from a competition in The Railway Magazine.

Where the Southern Railway had quick routes from London to the immediate South Coast that appealed to daytrippers, and the LNER and LMS had a mixture of clients ranging from business travellers to coal-haulage, the GWR's "territory" or Wales and Cornwall was more difficult to exploit, and the GWR used the Cornish Riviera Express to position itself as "The Holiday Railway", with the Riviera branding evoking the glamour of an expensive holiday in the South of France.

By a happy accident, the GWR had obtained a French compound locomotive (La France) in order to evaluate the potential benefits of compound design, and this ran on the Riviera Express, further reinforcing the "Riviera" theme.

The train used a wide range of locos, but is often associated with and depicted with the distinctively GWR-looking Castle Class locomotives (from 1924) and the King Class (from 1927), with the stop at Plymouth used to switch to a local locomotive (such as a Hall Class). The Britannia Class steam locos were used in the the early 1950s, with the Warship Class diesels taking over in 1958. 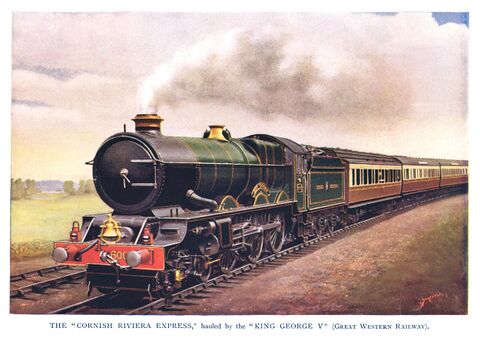 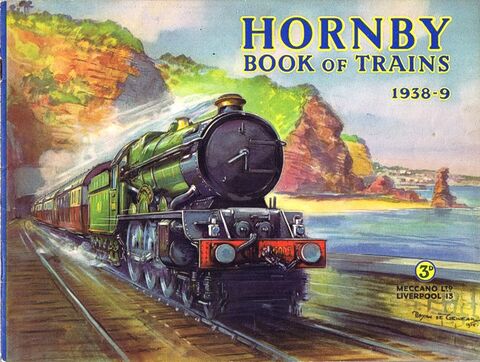 1938: GWR 6005 King George II hauling the "Riviera", on the front cover of the Hornby Book of Trains

EVERYBODY to whom residence in a genial climate is a health necessity should seriously consider the best Britain has to offer, before deciding to go abroad.

Down in the far south-western corner of England is a wonderful land, "mellowed by wstering suns", where the climate rivals in mildness and equability the Mediterranean resorts; where tropical and subtropical plants flourish in the open all year round; where the pure Ocean air exercises its most beneficial influence; and where scenery of the grandest can be found.

CORNWALL is that wonderland, and visitors are unanimous that it is all that is claimed for it as the Riviera of England.

"Cornish Riviera" travel book, 6d, at G.W.R. Stations and Offices, or from the Superintendent of the Line, G.W.R. Paddington Station, W.2.