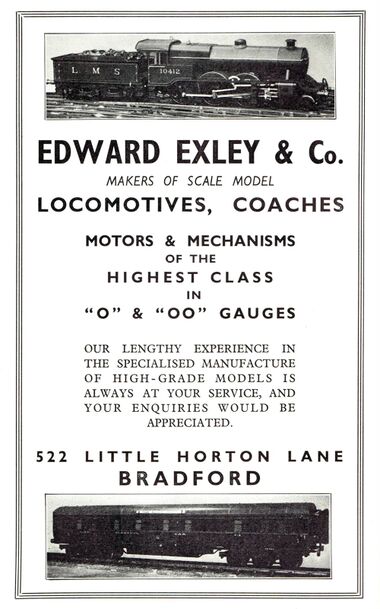 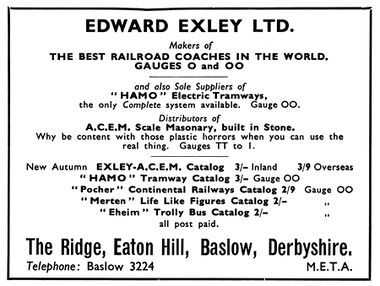 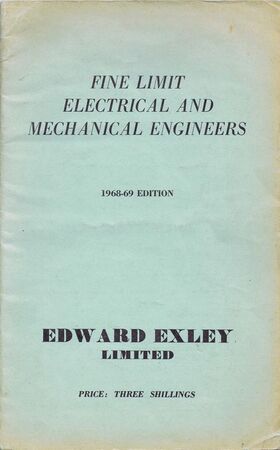 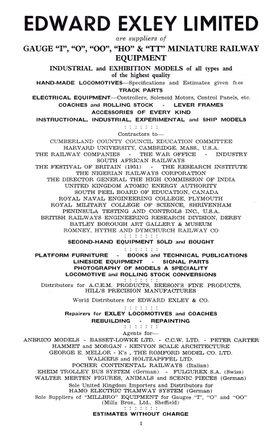 Edward Exley & Co. were founded in around 1923, and initially made gauge 0 and gauge 1 locomotives that ran under clockwork, steam, and electrical power, with 00-gauge (4mm scale) locos and coaches joining the range as the new scale gained popularity.

Exley were closely associated with Mills Brothers, and supplied Bassett-Lowke with B-L's "scale length" range of coaches. They became a limited company in 1947.

Exley's approach is probably best expressed by a quote from John Ruskin that featured in their catalogue:

All works of taste must bear a price in proportion to the skill, taste, time, expense and risk attending their manufacture. These things called dear are, when JUSTLY estimated, the cheapest. They are attended with much less profit to the maker than these things which everyone calls cheap.

In 1962 the factory was destroyed by fire, and Edward Exley took over Milbro.

By 1968, the company's catalogue was dominated by 00-gauge models and accessories, and although the front of the catalogue was still devoted to gauge 0 (7mm scale), these were only seven pages of a 32-page booklet, and only listed parts and accessories and support services rather than new items.

Owing to the destruction of the factory by fire some years ago, new coaches are not available, but second-hand vehicles after overhaul and repainting are from time to time on sale. Clients should write and ascertain if their requirements are available.

A full service of repairs maintenance and repainting in any livery is available. Details on request. The list of coaches below is for reference only as to the various types made during the last 41 years.

Edward Exley Ltd ceased trading in 1995, and the brand was revived as a specialist manufacturer in the late 1990's, and again in 2004.

As of January 2015, most of the Exley rolling stock on our 1930s layout isn't yet listed online.

Most notable (now that the Coronation Scot nine-car set has been put back into storage to free up space) are: