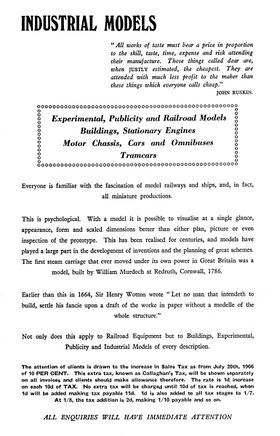 Although Edward Exley Ltd. are chiefly remembered nowadays for their model railway locomotives and rolling stock, the company had sufficient in-house expertise and a sufficiently wide contact list of other friendly model companies to feel comfortable advertising themselves as a manufacturer of industrial and promotional models.

To promote this side of the business, the end part of Exley's catalogues often consisted of several pages of black and white photographs of their recent display models and commissioned works.

" Everyone is familiar with the fascination of model railways and ships, and, in fact, all miniature productions.

This is psychological. With a model it is possible to visualise at a single glance, appearance, form and scaled dimensions better than either plan, picture or even inspection of the prototype. This has been realised for centuries, and models have played a large part in the development of inventions and the planning of great schemes. The first steam carriage that ever moved under its own power in Great Britain was a model, built by William Murdoch at Redruth, Cornwall, 1786.

Earlier than this in 1664, Sir Henry Wooton wrote; "Let no man that intendeth to build, settle his fancie upon a draft of the worke in paper without a modelle of the whole structure".

Not only does this apply to Railroad Equipment, but to Buildings, Experimental, Publicity and Industrial Models of every description. "