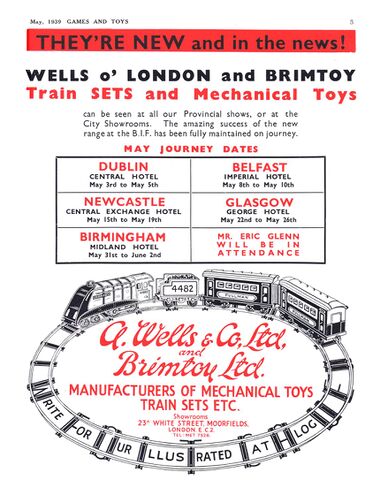 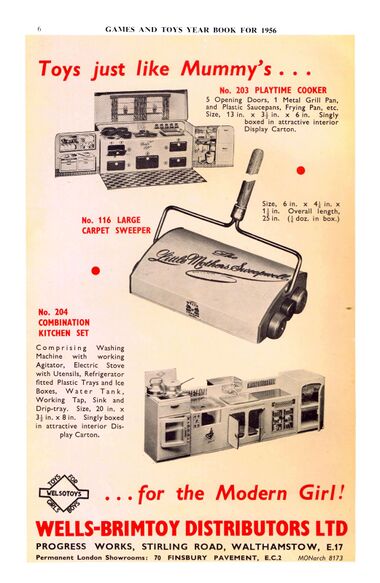 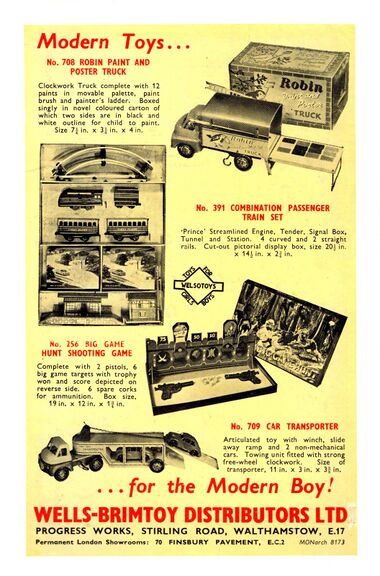 The Wells-Brimtoy brand was created in 1932 from the convergence of two companies specialising in low-priced metal toys, Wells and Brimtoy.

Alfred Wells started his metal toymaking business in 1919, seizing the opportunity that arose after the First World War (1914-1918) broke the dominance that southern German companies had previously had regarding metal toy production.

Wells produced a range of comparatively inexpensive tinplate vehicles that were cheaper to produce than the German pieces had been, and Wells created a Wells o’ London logo that showed two water-wells.

Brimtoy started in 1923, rising from the embers of British Metal and Toy Manufacturers, which had benefited from the boom in the toy industry immediately after WW1, but had then been caught out by the following economic depression in the early Twenties. Brimtoy included personnel from British Metal and Toy Manufacturers, and emphasised the continuity by basing their name on that of the older company.

Brimtoy continued to emphasise the Britishness (and non-Germanness!) of their product with a logo that incorporated Nelson’s Column.

The two companies became one in 1932, and then moved to a new factory site, Progress Works, in Stirling Road, Walthamstow.

Soon after the first World War in the year 1919 our Chairman, Mr. A.W.J. Wells opened a small toy manufacturing business in Dame Street, Islington, N1. This venture proved to be the nucleus of what is now a progressive and successful organisation.

Weathering the lengthy depression which followed the first World War, Mr. Wells moved his business to larger premises in Shepherdess Walk, Islington, N.1. and then again to an even larger factory in Somers Road, Walthamstow, where the policy enacted during this time made it possible to erect the factory in Stirling Road, Walthamstow, which today is the home of this large organisation.

The year 1932 brought further progress with the acquisition of the toy factory of Brimtoy Ltd., which was even at that time, known throughout Britain and, indeed, in many countries overseas for competitive train sets, accessories, and toy stoves. In 1949 A. Wells & Co. Ltd. And Brimtoy Ltd. Formed the company of Well-Brimtoy Distributors Ltd., which is now the Sales Organisation for both companies.

Thus it can be seen that the spirit of enterprise and progress shown by Mr. Wells has put his organisation in the forefront of toy manufacturers. It may also be interesting to note that our subsidiary Company – The Anglesey Instrument & Clock Co. – are manufacturers of various mechanisms and timepieces.

The Company enjoys renowned reputation for its products, particularly for the reliability of its clockworks. The brightly coloured coachwork of the toys has proved immensely popular, and it is with pride that we offer the merchandise shown in the following pages, knowing them to be, as a direct result of many years of experience in production and ingenuity of design, unsurpassed both for quality and price.

Identifying some of the less popular Wells pieces can be unexpectedly difficult, as the company seemed to be strangely averse to putting their name on their products. This is especially odd as the products somehow managed to find room for the words "MADE IN ENGLAND", and often went to great care to replicate authentic tyre-lettering on vehicles with white tyres. As a result, some Wells toys appear in books and auction catalogues marked as "unidentified maker", and others are referred to by the marks that are present.

An exception to the rule is that a few of the vehicles have a small "W" over the radiator grille, where car manufacturers would often put their marque.

Wells pieces can often be identified by their having the same distinctive tyres that have been used on another already-known Wells piece, and the clockwork vehicles often have an easily-recognisable clockwork mechanism with two obvious large-diameter and alarmingly thin gears that look a little like rotary sawblades, driven by an unusual helical spring would around the driveshaft. The helical spring was unusual on other toys, as although it was compact, it tended to be fairly weak in comparison to more conventional "coiled band" springs.

Because the identity of the Wells products (A.J. Wells, Welsotoys) and the Brimtoy produducts (Brimtoy, Pocketoy) continued in parallel after the two companies had supposedly merged, with products listed or marked rather inconsistently as either Wells or Brimtoy, or as Wells-Brimtoy, many collectors simply give up trying to establish which indvidual company to credit for a toy, or finding out whether an example was made pre-1932 or post-1932, and simply refer to all the products of the two companies, even before they merged, collectively, as "Wells-Brimtoy" products.