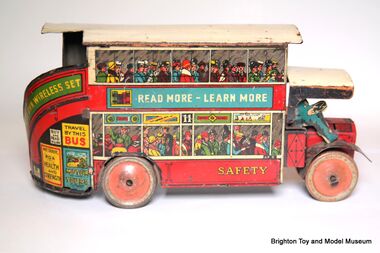 A lithographed tinplate model NS-series Number 11 Liverpool Street General Omnibus double-decker bus, marked "SAFETY" instead of "GENERAL", numberplate XM 1047, with "Made in England" on the base-lip of the two sides, and "BRITISH MADE" / "SMITH & CAVEY" on the white tyres.

An odd feature of the bus is that while it is (authentically) covered with advertising panels, these are all defiantly generic, with no actual brandnames. The two large advertising banners read "Eat plenty of Fruit" and "READ MORE - LEARN MORE", with "MAKE YOUR OWN WIRELESS SET" on the stairway banner, and other panels read "Travel by this BUS", "||||| for HEALTH and Strength", "MOTOR TOURS", and "BUY and READ ||||"

The bus is clearly a General Omnibus NS-series, withe the letters of the gold "GENERAL" logo replaced with "SAFETY". Not only is the shape very distinctive, the numberplate XM prefix appeared on the prototype NS bus, and 1047 is also an NS-series number (albeit one used on open-top versions).

The bus is described on auction sites as being made by "Smith and Cavey" ... we suspect that "Smith & Cavey" might have been a tyre manufacturer, the slight mismatch between the tyres saying "British Made", while the model base says "Made in England" makes us suspect that the tyre markings might not be those of the toymaker (just as Meccano Ltd vehicles tyres tended to read "DUNLOP", which didn't mean that the toys themselves were made by Dunlop).

We currently believe the piece to have been made by Wells of London (later Wells-Brimtoy). There are a number of reasons for this:

Finding out who Smith and Cavey actually were has turned out to be unexpectedly difficult. Online, the only mentions of the company that we've found so far are auction listings of examples of this one particular toy bus model, and an entry in the London Gazette for Smith and Cavey Limited, without an indication of the type of business.

An inspection of the bus shows that some of the tinplate appears to have been recycled - wear on the roof sections shows orange paint underneath, and aiming a torch spotlight inside the body reveals markings on the inside that show that the baseplate appears to have been made from a piece of tinplate that was previously part of (or meant for) a tin of polish or metal cleaner made by Hargreaves Bros, Hull and London ("For cleaning, Bright... and Preserving Bras... Copper, Zinc, Steel ... Metallic Surfaces, Co... Motor Cars, Cycles & Aerop ..."

Hargreaves Brother are supposed to have been taken over by Reckitt and Sons in 1922, so perhaps the takeover might have resulted in usefully-unusable stocks of one-side-printed tinplate.