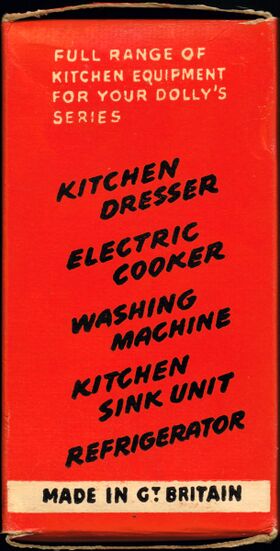 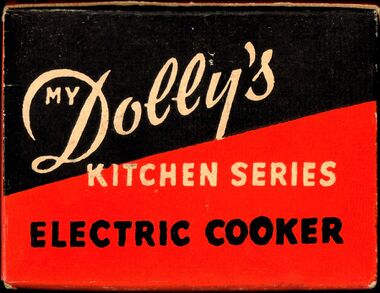 The "My Dolly's" Kitchen Series of 1:16 dollhouse furniture was distributed by Wells-Brimtoy (and apparently made by Wells), we think in the 1950s.

The charming range was mainly made of lithographed tinplate, printed in a rather nice off-white and red with black outlines (on later pieces, the "white" was a more stark white), with some smaller plastic components (doors, sinks, taps, and handles), and supplied with tiny plastic accessories, such as brooms, carpet sweepers, jugs, pots and pans, brush and dustpans, rolling pin and plate, and milk bottles.

The side of the box for the Electric Cooker says:

"Full range of Kitchen equipment for your Dolly's Series"

While we have all five of these pieces, we also have a tinplate cupboard, and a red and white plastic kitchen table and four chairs (with the paintwork on the cupboard being a more basic white than the earlier off-white). We're not sure if these (later) pieces count as extensions to the "My Dolly's" range, or are separate and more generic pieces by Well-Brimtoy.

The typefaces on the "My Dolly's" boxes that we've seen suggest that "My Dolly's" (with a proper logo) was meant to be the brandname, and that "Kitchen Series" was perhaps planned or hoped to be a series of products in that larger range: it suggests that there might have been plans to produce perhaps a "My Dolly's Bedroom Series", or a "Living-room Series", and so on. While the branding on the packaging "left the door open" to a number of other future series, perhaps it also didn't hurt that the branding made it look as if this was part of a larger range.

However, the only pieces in branded packaging we've seen are the "Kitchen Series", and it might be that no other series were marketed under the brand. As far as dollhouse furniture is concerned, kitchenware is ideally suited to painted or lithographed tinplate, as many or most of the original items (fridge, washing machine, cooker) are also painted metal. The technique is not as obviously a good match for, say, living-room sofas, and it might be that the Dolly's Home range started and stopped with Kitchen furniture.

While the official "My Dolly's" pieces are very distinctive and easily recognised as forming a range, the pieces themselves are anonymous and carry no branding or identifying marks, other than "MADE IN GT. BRITAIN", in black letters, as part of the printing. This would seem to be in line with the Wells-Brimtoy marketing philosophy, in which it was easier to strike deals to sell their products through outlets like Woolworths, to have them bundled and sold with dollhouses, or supplied through other channels, if the pieces weren't ostentatiously marked with the maker's name (see, for instance, Kleeware's supplying Mettoy of batches of plastic dollhouse furniture for the Mettoy metal dollhouse, in Mettoy-branded boxes -- this deal would have been more difficult to pull off if the Kleeware pieces were already stamped "Kleeware").