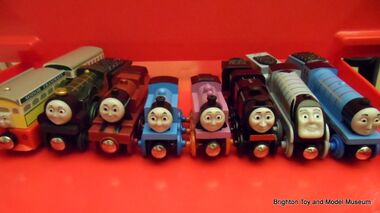 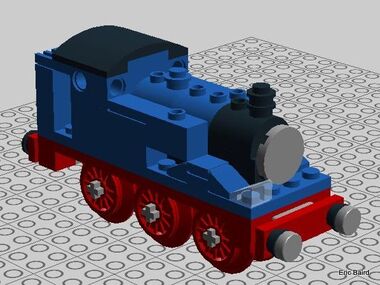 Thomas the Tank Engine was the lead character of a best-selling series of children’s books, The Railway Series, written by the Revd. W. Awdry, originally for his son, Christopher. The books were initially illustrated by Reginald Payne, and then by C. Reginald Dalby. As the stories' most memorable character, "Thomas the Tank Engine" is often used as "shorthand" to refer to the entire collection of stories.

The books started to be published at the end of World War Two and were set on the fictional island of Sodor, where the Fat Controller ran a railway with the help of a disparate collection of engines and rolling stock acquired from various outside railways, with different colours, shapes, histories and personalities. Each story typically acted as a "morality play".

The stories gained a new audience when they were turned into "Thomas the Tank Engine and Friends" (1984-) an animated children’s television series first narrated by Ringo Starr (originally with physical models, later with computer-generated graphics), which became syndicated world-wide. The simple format of the show and the stories, the easy identification of the characters and the "mythological" island location all helped to sell the show around the world, and the unseen narrator and characters with large faces whose mouths hardly moved made it easy to dub new voicetracks and "localise" the series for audiences in different countries.

Although some of the earliest characters were rebuilt hybrids of different engines (with their histories explained in the stories), Thomas (as illustrated) was based very closely on the Billington E2 second series tank engine built at Brighton Locomotive Works (which was sited alongside Brighton Station).

As a railway enthusiast, Awdry tended to base the personalities of the characters on the quirks of the original engines, and was famously Most Unhappy when the franchised enterprise produced stories or images that did not live up to his insistence on authenticity. When an illustrator produced images of Thomas that suggested that his front and rear buffers would be at slightly different heights, an exasperated Awdry wrote another story in which Thomas had a bad accident to explain the illustrator’s mistake.

Awdry experimented with an "original" locomotive design for the green "Percy" 0-4-0 locomotive, but after disagreements between Awdry and his illustrator over pictures that didn't correspond closely enough to Awdry’s carefully handbuilt 00-gauge metal prototype, subsequent characters tended to be based on specific existing reference locomotives.

Awdry’s easily expandable format meant that the Thomas books became much more successful than the contemporary "The Little Blue Engine" stories (with pictures by the Enid Blyton illustrator, G. Higham) which had appeared at around the same time and also featured locomotives with large round faces. It was also much easier to keep adding characters to Thomas' world than to that of smallfilms' made-for-TV Ivor the Engine (1958-). The popularity of Thomas' TV series and merchandising (including 00-gauge sets by Hornby and wooden playsets by Learning Curve) also arguably encouraged the TV series Underground Ernie (2006-) and Chuggington (2008-), both of which also feature anthropomorphic trains as their main characters.

Thomas in the Museum

Although the Museum has some 00-gauge Hornby "Thomas" locos and rolling stock, putting it on the period 00-gauge layout tends to diminish the historical authenticity of the layout, so Thomas and his friends only occasionally sneak out onto the display, when nobody's looking.

As part of the Museum's 2013 celebrations of the anniversary of Frank Hornby, we've now acquired a quantity of plastic Meccano and wooden trains suitable for active play for small children (courtesy of the Heritage Lottery Fund), and these include a number of "Thomas" characters that can be compared to the real locos in the Museum as an activity (for instance, "Emily the Engine" corresponds to the large green "Stirling Single" locomotive just past the ticket barrier).