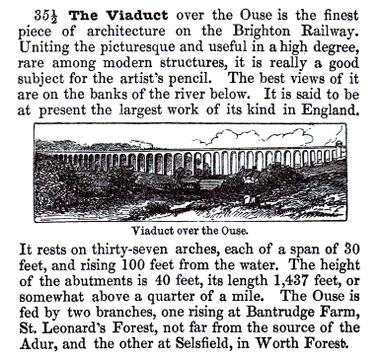 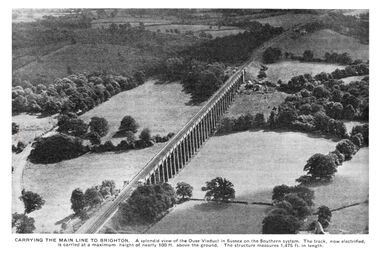 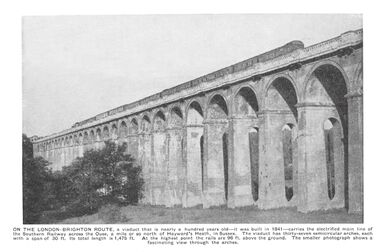 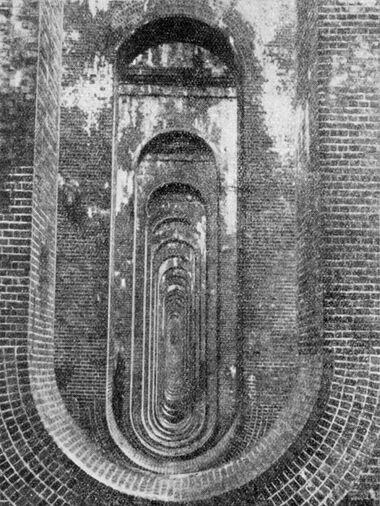 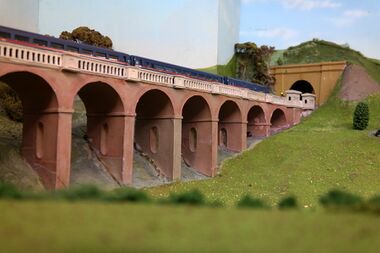 The Ouse Valley Viaduct, or Balcombe Viaduct was completed in 1841 as part of the construction of the railway line into the new Brighton Station. It's sister-viaduct built for the same line is the London Road Viaduct that leads into Brighton Station – the main difference between the two being that the "Brighton" viaduct is curved and the "Ouse Valley" one is straight.

Both viaducts were engineered by John Urpeth Rastrick, who had previously been involved in building some of the world's earliest steam locomotives, and had built a cast-iron bridge over the River Wye. Although the London Road viaduct is now more difficult to see (because of the subsequent urban building around its base) it has the advantage of being easier to visit.

TransportHeritage.com describe the viaduct as "Probably the most elegant viaduct in Britain".

The viaduct has thirty-seven arches topped by ornamental balustrades, and features distinctive double-arched "cutouts" in each arch pier designed to further reduce the amount of material needed to build it. The viaduct is a classic subject for photography, since its dead-straight construction causes the spaces through each arch to line up, creating a unique view through the length of the viaduct's structure.

The viaduct is a Grade 2 Listed Building, and is still in heavy use today (and still much-loved by photographers!).

THE VIADUCT over the Ouse is the finest piece of architecture on the Brighton Railway.

Uniting the picturesque and useful in a high degree, rare among modern structures, it is really a good subject for the artist's pencil. The best views of it are on the banks of the river below. It is said to be at present the largest work of its kind in England.

It rests on thirty-seven arches, each of a span of thirty feet, and rising 100 feet from the water. The height of the abutments if 40 feet, its length 1,437 feet, or somewhat above a quarter of a mile. The Ouse is fed by two branches, one rising at Bantrudge Farm, St. Leonard's Forest, not far from the source of the Adur, and the other at Selsfield, in Worth Forest.