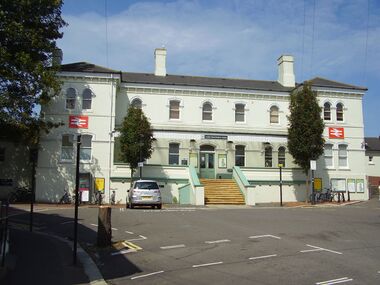 It's at the base of a steep incline where the track runs alongside Ditchling Rise and then ducks under Ditchling Road, through Ditchling Tunnel.

The station marks the point where now-defunct line to Kemptown used to diverge from the main line.

To anyone travelling Northward along Ditchling Road, the site of the tunnel-crossing is marked by a brick wall on your left with no obvious buildings behind (because the wall is in front of a steep drop to the tunnel mouth) and a bright green petrol station on your right, which is directly on top of the tunnel.

The footbridge over the railway line that connects the two station platforms can be used by passers-by without needing a platform ticket.

The station has a fairly pleasant rural feel, surrounded by residential building and with a lot of greenery towards the tunnel mouth. Ditchling Road itself, high up above the tunnel entrance, isn't visible from the station apart from the very top of the green petrol-station roof.

The station has a white rectangular ticket hall on its south side, opposite the Signalman's Arms public house. The building is also home to the Brighton Model Railway Club.