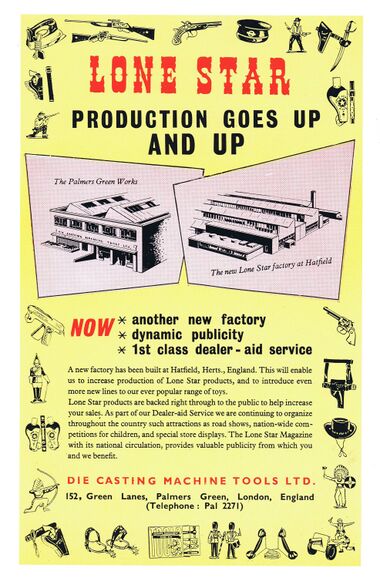 1955: "Lone Star production goes up and up". Note the selection of toys around the page edge, mostly "Cowboys and Indians"-related [image info] 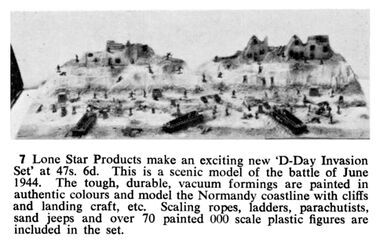 DCMT had initially manufactured some cast metal toys for Crescent, and then started manufacturing in their own right. Since "DCMT" was slightly cryptic (and the full name was unhelpful for a toy brand), the company picked the name Lone Star as their toy brand, which (at eight letters plus a space) was still reasonably short and easy to letter on the base of small cast items.

The "Lone Star" brand was tailored for "Wild West" - related toys – children's enthusiasm for playing "Cowboys and Indians" after the war (fuelled by Hollywood films) created a demand for diecast toy cap-firing guns, which DCMT was ideally placed to satisfy. While "Lone Star" was a reference to the single star on the state flag of Texas (the "lone star state"), it also resonated with "The Lone Ranger", and with the five-pointed star sheriff's badge that children would be familiar with from films and "cowboy" play costumes.

DCMT invested heavily in promoting their "Cowboys and Indians"-themed brandname, organising events and competitions and hiring Roy Green to play the cowboy "Steve Larrabee". This led to a strong enough brand recognition with toyshops that the company applied the brandname to their newer ranges of toys (such as model trains and cars) that were nothing to do with cowboys. This led to the slightly perplexing situation of a train set made by a British company with British-style locos and rolling stock being marketed to British families under an American-sounding name, causing many people to assume that the company must be American.

While Lone Star continued producing a wide range of diecast metal toy guns (including, in later days, a licensed James Bond toy Walther PPK), and are mostly remembered nowadays as a maker of "cap guns", they seem to have taken a keen interest in what other diecast toymakers were doing, resulting in a product lineup that ranged from the slightly derivative/generic to the genuinely innnovative.

The company also made other toys that didn't easily fit into a range, such as the 1210 Giant Construction Crane, and there was an "International Peace Force" range of pretty standard army vehicle types, but finished in "United Nations" blue rather than drab green, and with odd silver detailing.

A new factory has been built at Hatfield, Herts, England. This will enable us to increase production of Lone Star products, and to introduce even more new lines to our ever popular range of toys.

Lone Star products are backed right through to the public to help increase your sales. As part of our Dealer-aid Service we are continuing to organize throughout the country such attractions as road shows, nation-wide competitions for children, and special store displays. The Lone Star Magazine with its national circulation, provides valuable publicity from which you and we benefit.

In 1963 Lone Star will be concentrating on improving their Treblolectric rolling stock, both passenger and goods. They will be diecast and have greater detail, with nylon bearings as well as axles, thus reducing the friction. All locomotives will be tested to pull not less than four coaches, but up to twenty-five coaches have been hauled by one locomotive on their test track. A new improved controller and a range of structures, motor vehicles and figures are also in preparation.

The following 54 files are in this category, out of 54 total.