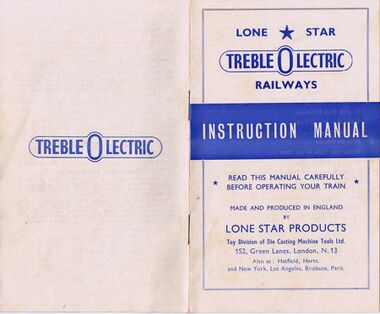 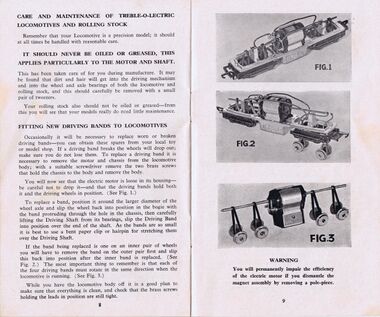 After Lone Star's initial range of push-along toy trains, "Lone Star Locos", the company produced a further generation of "000-gauge" trains in around 1960, which managed the feat of including electric motors in the tiny locomotives. This was quite an achievement considering that none of the larger manufacturers producing 00-gauge had yet attempted to produce a motorised system anywhere near this scale ("N gauge" appeared somewhat later).

In 1963 Lone Star will be concentrating on improving their Treblolectric rolling stock, both passenger and goods. They wil be diecast and have greater detail, with nylon bearings as well as axles, thus reducing the friction. All locomotives will be tested to pull not less than four coaches, but up to twenty-five coaches have been hauled by one locomotive on their test track. A new improved controller and a range of structures, motor vehicles and figures are also in preparation.

Lone Star who were the first in the field with 000, or N, gauge equipment, have now increased their range to include Trans-Continental models as well as two motorised British diesel locomotives. Two of the seven train sets are specifically intended as starter sets, and the first, E.L. 51, is a goods set which includes the B.R. D5900 locomotives. Two of their seven train sets also include an oval of track requiring a space of 3 ft. by 2 ft. This can of course be extended at a later date with the various items of points and track that Lone Star have available. One of our illustrations shows a layout that has been extended with Britains trees, Faller buildings and a number of Lone Star accessories. The de luxe train set is quite unique in that it is a complete layout on its own with over ninety pieces which will fit on to a 3 ft. square card table, but which can be extended into an even more elaborate layout at a later date. The layout includes hills, high level track, bridges, tunnels, roads, and many other items.

Trans-Continental sets include the F7 diesel locomotive, and items of additional rolling stock. A Baldwin 0-8-0 locomotive is available separately, as also is a very comprehensive range of rolling stock of both British and Continental prototypes.

The "Treble O Lectric" name seems to have been a conscious attempt to emulate what Meccano Ltd. had done with the "Hornby Dublo brand, making their name synonymous with the "double-Oh" format ... but for 000/"triple-O" scale trains. The name "Trebl0-O" would have been catchier and even closer to "Dublo", but since the company already made 000-scale push-along trains, the new name needed to distance the motorised product from the earlier range, and this lead to the rather ungainly and difficult-to-remember "Lone Star Treble-O-Lectric" name.

The awkwardness of the name may have contributed to the failure of the product line – even today, owners tend to refer to the trains simply as "Lone Star".

Lone Star managed this by adopting a slightly unconventional approach that borrowed from the method used to provide centralised power to multiple machine tools in Victorian factories - a central powered overhead driveshaft connected to the smaller units by drivebands. In the case of Lone Star locos, this meant a central horizontal electric motor driving a horizontal shaft extending the length of the loco, with multiple rubber bands looped around the shaft, and twisting though 90 degrees to also loop around individual wheel axles.

Lone Star's system avoided the need for high-precision engineered and lubricated gears. Predictably, the system was prone to slippage, which was partly compensated for by the amount for redundancy (each axle being independently driven from the same shaft), but the downside was that the locomotives were fiddly to service when the rubber bands needed adjusting. 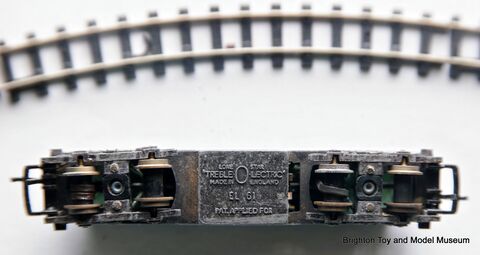 Underside of a diesel loco EL.61, with one surviving rubber band (middle-right)

The new electric system was not altogether successful. Model railway enthusiasts were dubious about buying tiny trains with rubber bands instead of gears, and the public were dubious about buying a very small cheap system in a non-standard format from a company that they might not have heard of. The Lone Star 000 electric system is supposed to have disappeared by the mid-1960s (although Beatties still seemed to have some stock in 1967).