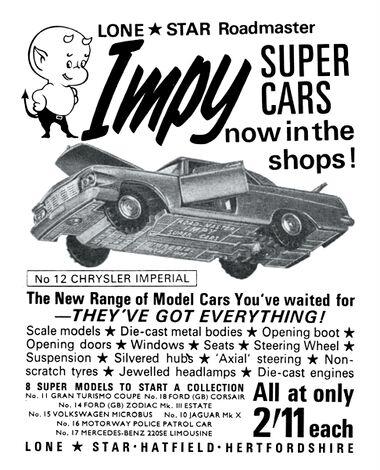 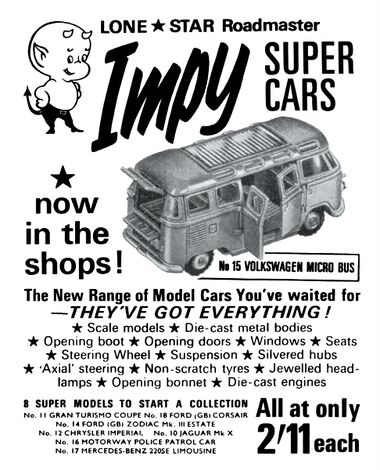 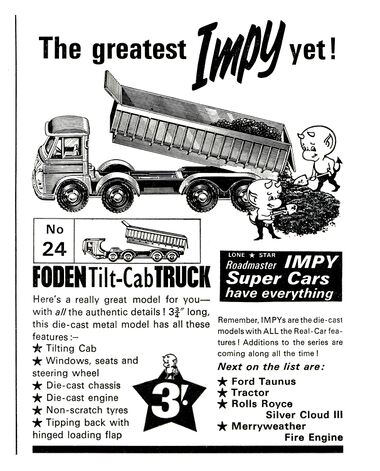 Impy Toys diecast cars were produced by Lone Star (DCMT) from around 1965/1966 onward. The range was a follow-up to the company's 1956 Roadmaster range.

Impy Toys (officially Lone Star Roadmaster Impy Super Cars) were smaller than comparable Corgi Toys range, and made a point of including a range of "Corgi-type" opening doors and other features but in a smaller size (hinted at by the "imp" in the name). When Mattel then produced their Hot Wheels range with low-friction axles, Lone Star responded with their own low-friction models, later tagged the Lone Star Flyers range.

Although the common name "Impy Toys" doesn't seem to have actually appeared on the packaging we've looked at, and might not be technically correct, the name was fairly implicit considering the wider context of the competing Dinky Toys, Corgi Toys, Husky Toys, and Budgie Toys, and the range is understandably often referred to casually as "Impy Toys", instead of the rather longwinded official name, "Lone Star Roadmaster Impy Super Cars".

The attempt to give their small models "opening everything" meant that the profusion of doors and hatches with deep open clearance-spaces sometimes interrupted what would have otherwise been smooth lines – the Impies sometimes looked more "chopped-up" than the Corgi equivalents, which were better at hiding their joints, partly due to their larger scale, but also due to slightly more sophisticated designwork.

... from the box of a #24 Foden Open Truck, not necessarily the complete final range