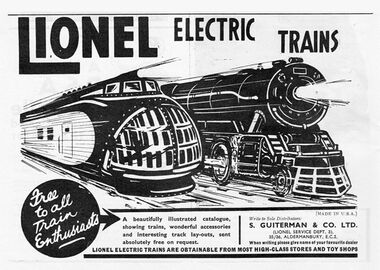 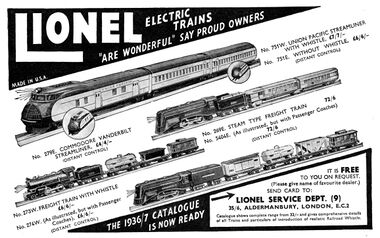 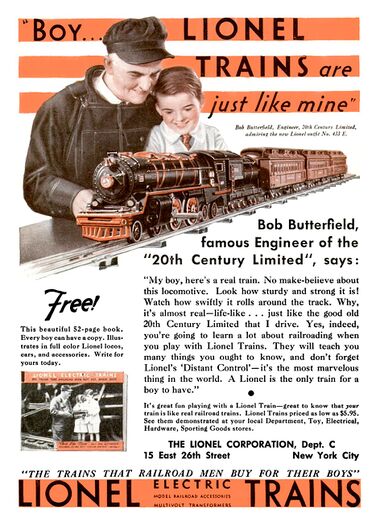 Lionel Corporation was founded by Joshua Lionel Cowen and Harry C. Grant in New York in around ~1901, as a company that made electric fans and other gadgets and novelties. Feeling that an electric fan wasn't the most visually arresting piece for a shop window display, Lionel made some promotional electric trains in order to catch the eye of passing customers, and the trains ended up attracting more attention than the products that they were supposed to be promoting.

Lionel's early-period trains ran on track that was close to (but not quite the same as ) gauge 2, which Lionel decided to call "Standard Gauge", sneakily trademarking the name so that after unilaterally deciding what constituted the "standard", they were the only company allowed to call their trains "standard gauge", even if others made compatible track and trains. Lionel only just survived the Great Depression, and as it had become clear that customers wanted smaller and cheaper-to-produce trains, Lionel launched gauge 0 and 00-gauge ranges in 1938, and discontinued the older, larger range in 1939. Although they experimented with other gauges, gauge 0 remained popular.

Lionel boomed in the late 1940s and early 1950s, becoming the dominant US model railway brand.

The first US market leader, Ives, had been overtaken by Lionel in the 1920s and gone bust in 1928, when Lionel and American Flyer had bought half-shares. Lionel bought American Flyer's share in Ives a couple of years later, and American Flyer was then bought by A.C. Gilbert in 1937. When Gilbert went bust, Lionel also acquired the American Flyer brand, and then went bust itself, in 1969, its assets and branding being bought by General Mills. GM then created a new company, Lionel LLC.

The "classic" Lionel era is generally considered to have ended in 1959 when Cowen left the company.

Lionel items on display in the Museum (and waiting to be given their own wiki pages) include: