A pre-war New York Central railroad "Hudson" locomotive 700E (with tender 700T), by Lionel Trains, circa 1939. the loco is marked 5344 on the cab, and NEW YORK CENTRAL on the tender. It was produced from 1937 until (we think) approximately 1941, when America's entry into WW2 resulted in the country's manufacturing being prioritised for war work.

The Lionel 700E has been described as the ultimate pre-war collector's Lionel loco, desirable not just because of its rarity, but because it represented a key stage in American model railroading.

Before the 700E, Lionel had been producing more "toyish" locomotives, but with the 700E they invested substantial time and money creating a fully diecast model with enough detail to satisfy modelling purists. Created with Lionel's new high-pressure diecasting machine using dies created in Italy, the 700E was big, and chunky, and realistic, and was as heavy as it looked. It was also correspondingly expensive, costing a whopping seventy-five dollars, which accounts for why there aren't huge numbers of them in existence.

The success of the 700E project (and the fact that they now owned the diecasting equipment) encouraged Lionel to concentrate more on model railroads rather than toy railroads, making the 700e an important part of the company's history (and therefore, even more desirable to collectors). 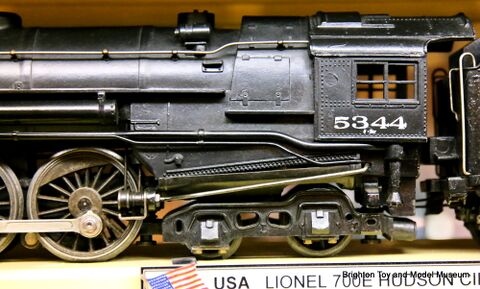 After the war, Lionel restarted production of the "Hudson", but the post-war version wasn't quite as nice, with numerous part substitutions and changes ... the difference in manufacturing emphasis away from a "purist" model being summed up by the decision to replace the authentic "5344" and "NEW YORK CENTRAL" markings on the cab and tender with "LIONEL LINES" markings.

Because the post-war "700" and "763" variants look superficially so similar to the 700E model in photographs, anyone buying a supposed 700E is advised to have it looked over by an expert first, to make sure that it isn't a later Lionel model that's been innocently misidentified or (less innocently) modified and passed off as a pre-war model – we know of cases where buyers have nearly "gotten their fingers burned" and spent a lot of money on something that isn't the genuine article.