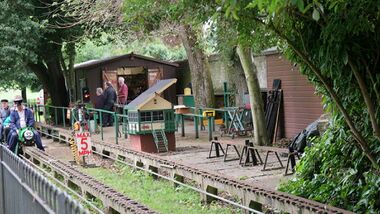 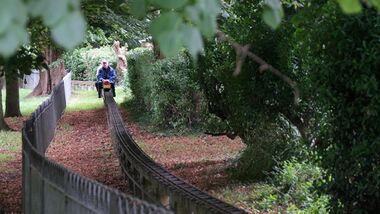 2018: "Riding the rails" surrounded by trees and bushes [image info] 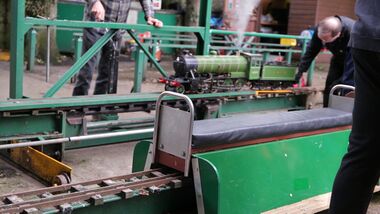 2018: Using the Locomotive Crane to transfer a live steam locomotive onto the track [image info] 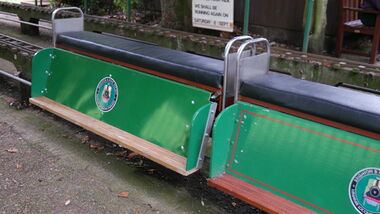 2018: Seating: Passengers straddle the benches, on leg on each side, to guarantee even weight distribution [image info] 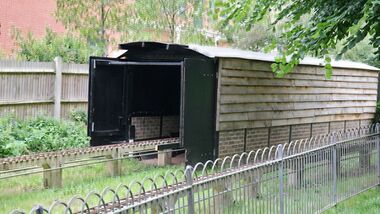 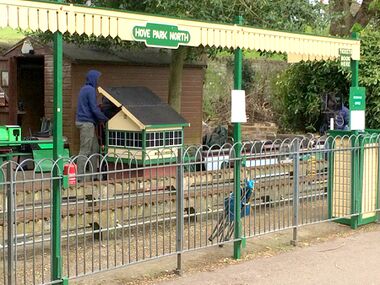 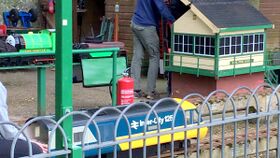 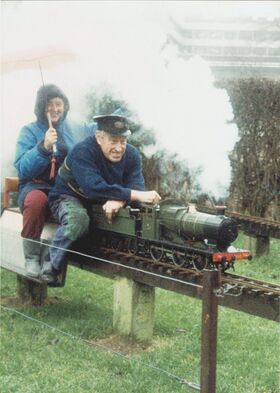 Hove Park Railway is a rideable five-inch-gauge miniature railway in Hove Park, laid out along the northward section of the Western edge of the park (in the same corner as the British Engineerium). It was created in 1951 at its a current location by the Brighton & Hove Society of Model Engineers, and is now run by the Brighton & Hove Society of Miniature Locomotive Engineers.

Before this it was a feature of Brighton Zoo, at Withdean.

The railway is open to the public on special days, and is especially popular on Summer bank holidays.

The railway has two parallel tracks, with a loop at each end, and a mock-up station ("Hove Park North") in the middle. The "station" area sells the tickets, with passengers queueing up outside the railings, and being let in a few at a time to board the trains. For added variety, the track includes a shed-like "tunnel" section.

The middle section of the layout also houses the toolshed and storage areas, safely on the "non-public" side of the tracks. Equipment includes a loco crane section of raised track that can be moved about, and then lowered onto the main track, with a ramp, to allow locos to be added to and removed from the layout.

On a more conventional railway this would be done by taking locos on and off the main track by running them onto a siding, but a raised track, where people's legs hang down the sides, precludes the use of normal railway track "points" – there's no way for the track to "branch" without doing Bad Things to the passengers legs, so the track can't be more complex than a simple loop.

The track is raised on a series of concrete trestles, with steel side safety-bars.

The "carriages" are long padded benches with a safety-stop and grip handle ant front and back, and wooden footrests running the length of the "car". The space between the seat and footrest is completely shielded by large panels, and as a further safety measure, there are even leg-guards front and back to stop people deliberately trying to poke their legs forward to kick passing shrubbery and perhaps hurt themselves that way.

On our last visit, the railway was running a range of model locomotives, mostly powered by electric motors: