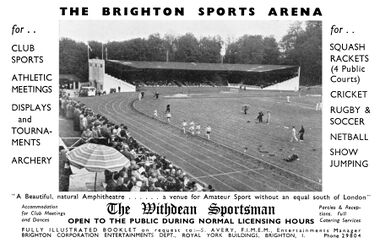 Advert for Brighton Sports Arena, Withdean, with no mention of a zoo remaining on the site (~1961) [image info]

Brighton Zoo seems to have been open from 1948 to 1952 (some sources differ, but all personal accounts and photos seem to come from this date range), on a site now occupied by Withdean Stadium.

Its miniature railway was moved to Hove Park to become the current Hove Park Railway.

, and there might also have been some sort of zoo operating in Brighton (perhaps private?) in the 1920s. We'll update this page if we find more details.