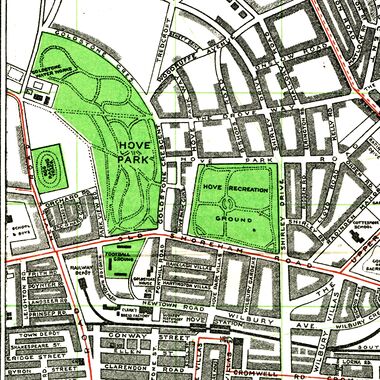 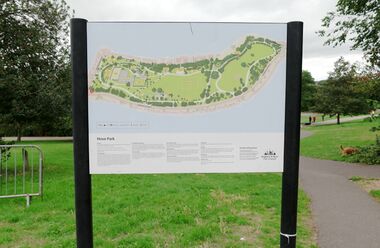 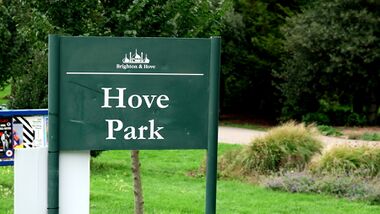 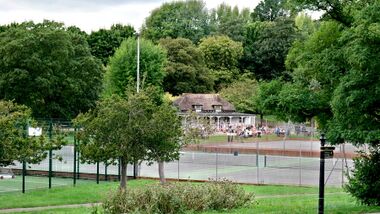 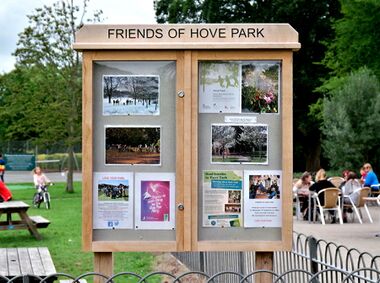 "Friends of Hove Park" noticeboard, by the Cafe [image info] 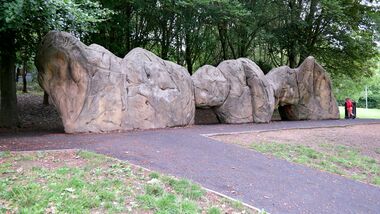 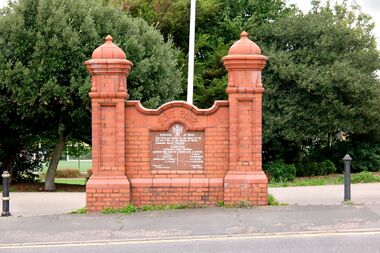 Commemorative masonry, entrance to Hove Park, on the Park's southern side [image info]

Hove Park is a rather nice park situated in Hove. it has a perimeter path used by walkers and joggers, a turf-and-path maze that looks like a fingerprint, and a rideable miniature railway.

The British Engineerium is adjacent, off the North-West corner of the park.

, a tract of 40 acres on the Old Shoreham Road, at the west end of Hove, was opened in 1906. It is attractively laid out and provision is made for games. An object of interest is the Goldstone, an immense block estimated to weigh 20 tons. An inscription speaks of it as "The Tolmen or Holy Stone of Druids. Col-thor or Godstone of Ancient Britons," but investigators doubt this history.

A little to the east of the Park is Hove's oldest Recreation Ground, an area of 20 acres acquired in 1887. It has a border of fine trees and part of the ground is reserved for lawn tennis. Both these open spaces are within easy walking distance of Hove Railway Station or of the motor-bus service.

Running parallel with the seashore is the Aldrington Recreation Ground, containing 12 acres, purchased in 1895.

Hove Park was originally part of a larger estate owned by the Stanford family who lived at Preston Manor in Brighton.

The Mayor of Hove, Bruce Morrison, opened the park to the public on 24th May 1906.

Hove Park's great claim to fame, the Goldstone, lies in the South West corner. This huge rock, weighing about 20 tons, is commonly believed to have been used by the druids for worship. Its notoriety was so great in the 1830s that the local farmer, on whose land it stood, buried it to stop crowds of sightseers trampling his crops. It was dug up again and placed in its present position in 1900. Another legend has it that the devil threw it there while excavating Devils Dyke, the deep valley through the Downs above Hove. Whatever the reality behind these legends, the shape of a human face is visible in the stone – have a good look and you'll spot it.

The 60 metre miniature railway at the northern end of the park opened in 1951. This was mostly rebuilt after the great storm in 1987 when much of the track was damaged by falling trees. It is operated by the Brighton & Hove Society of Model Locomotive Engineers. You'll find the operating times on the information board near the café.

Art in the Park

In Summer 2006, international enviromental artist Chris Drury created a unique "thumbprint" art installation on a south facing slope. Formed from York stone slabs on a lime mortar base, the artwork represents man's influence on the landscape. The piece was commissioned by Brighton and Hove's Art Commission.

Four flowerbeds, situated between the main road and the rose garden are used to display some of the winning designs from the annual City in Bloom Children's Flowerbed competition.

Built in 1921, the bowling green is the home of Hove Park Bowling Club and a full programme of fixtures are played during the summer months. Casual players are also welcome to use the green and fees can be paid in the park cafe. The bowls pavilion was completely restored in 2005.

There are 12 tennis courts at the southern end of the park in three separate enclosures. The five floodlit astro-turf courts were resurfaced in 2005 and are converted for football use during the winter. The pitches are bookable through the council's booking service.

An informal floodlit basketball court can be found on the western edge of the park.

The artificial climbing boulder, installed in summer 2005, is popular with people of all ages wanting to try a new a challenging sport. It is open to everyone, but also used by school groups and holiday clubs which book professional coaches to teach basic climbing techniques.

The playground was completely replaced and extended in 2008. It offers a wide range of equipment for children of all ages and includes space for informal play.

Open seven days a week. Public toilets, which include accessible and baby changing facilities are situated near the cafe.