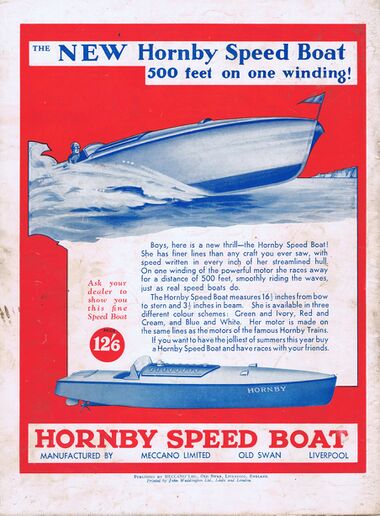 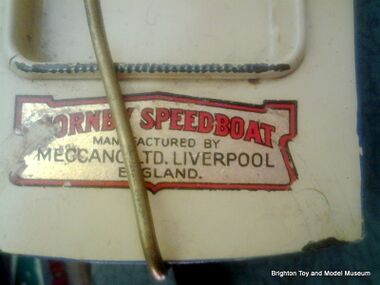 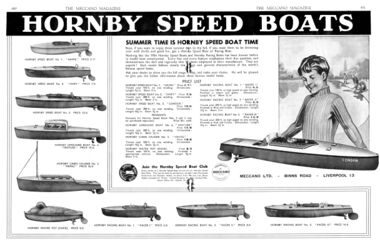 June 1934: "Summer Time is Hornby Speed Boat Time" - another double-page advert centrefold, from 1934. The scale of the boat is somewhat exaggerated... [image info] 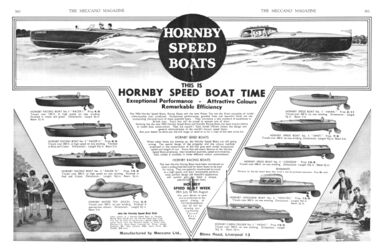 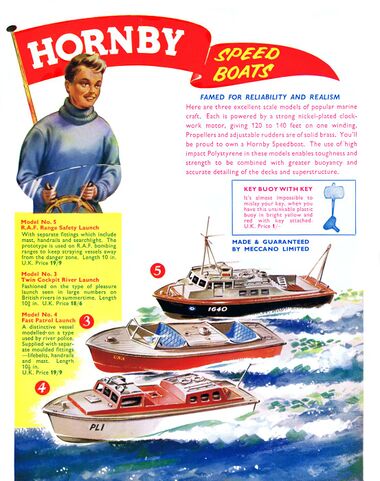 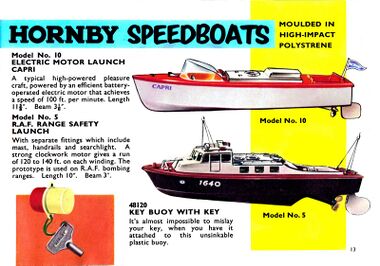 "The NEW Hornby Speedboat" was advertised in Meccano Magazine in 1932. Choice was initially limited to a single model available in three two-tone colour schemes, but before long, Meccano Ltd. had a whole range of very good-looking enamelled metal clockwork-powered Speed Boats and Racing Boats.

The spelling of "Speedboat" was variable - Company advertising tended to break it into two words ("Speed Boat"), while the gold foil sticker on our museum example says "Speedboat" as one word.

The NEW Hornby Speed Boat: 500 feet on one windng!

Boys, here is a new thrill – tthe Hornby Speed Boat! She has finer lines than any you ever saw, with speed written in every inch of her streamlined hull. On one winding of the powerful motor she races away for a distance of 500 feet, smoothly riding the waves, just as real speed boats do.

The Hornby Speed Boat measures 16½ inches from bow to stern and 3½ inches in beam. She is available in three different colour schemes: Green and Ivory, Red and Cream, and Blue and White. Her motor is made on the same lines as the motors of the famous Hornby Trains.

If you want to have the jolliest of summers this year buy a Hornby Speed Boat and have races with your friends.

The initial range of Hornby speedboats were available until 1939, and by ~1936 the range consisted of a clutch of named speedboats:

, and a clockwork Duck Hornby Water Toy, which was presumably not meant for racing.

The boats were heavily advertised during the 1930s in Meccano Magazine, often having the colour back page, and several times earning a double-page centrespread advert (in black and white).

The boats stopped being available in 1939 with the outbreak of war, but a new range of plastic-shelled Hornby Speed Boats (with brass propellors and rudders) was launched in 1960.

Famed for Reliabiliy and Realism

Here are three excellent scale models of popular marine craft. Each ispowered by a strorng nickel-plated clockwork motor, giving 120 to 140 feet on one winding. Propellors and adjustable rudders are of solid brass. You'll be proud to own a Hornby Speedboat. The use of high impact Polystyrene in these models enables toughness and strength to be combined with greater buoyancy and accurate detailing of the decks and superstructure.

A genuinely innovative touch that Hornby advertised in the Sixties was their use of a "key float" – a red and yellow high-visiblity hollow plastic float that was tied to the key. This addressed a number of problems: the boat did nothing without the key, but unike a clockwork locomotive, if the owner mislaid the key, even if they had a spare it was likely to be at home and they would probably not realise that they needed it until they were already at the boating pond and wanting to wind up their boat. Keys were easy to lose in grass, and even easier to lose in the water of a boating pond, when one was fumbling with the side of a boat with cold, wet, slippery hands, and looking for the keyhole.