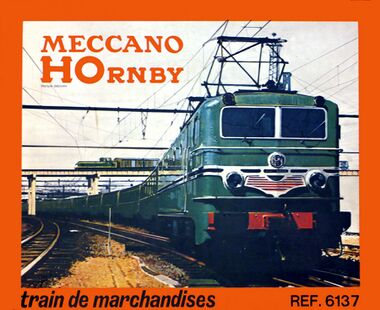 Although Hornby Dublo had been launched (with a small number of models) just before World War Two, and the range had blosssomed when production eventually restarted in earnest after the war, the Dublo range was not well suited for the French market, as it seemed to consist entirely of very British-looking trains and rolling stock.

As with Dinky Toys, the French tabletop railway range needed to be optimised for the French and Continental market, and with model railways there was also the complication of exact scale: while Britain and continental Europe had both standardised on track that was half the size of Gauge 0 (which was 7mm/foot), the British market, encouraged by Henry Greenly, had decided to standardise on slightly over-scale superstructure and accessories (4mm/foot), whereas the continental market, was tending towards having the superstructure to the same scale as the track, at 3.5mm/foot. We therefore ended up with two different scales, "00" gauge in the UK, and "H0" (half O) on the Continent. While the two standards were not hugely different, HO was seven-eighths of the size of 00-gauge, which was just enough to be annoying, and to spoil the line of a run of locos and rolling stock.

Since localising Dublo wasn't really an option, Meccano France had to wait until it was really sure that it could get away with creating an entirely independent and self-sufficient range just for the French and European market, without being able to pad it out with Dublo items, or gain much extra income from selling French items into the UK as additions to the Dublo range.

The one product that they were able to sell into the UK market was their elevated track, system, as the 00 and H0 track was physically the same size.

Around ~1964-ish, the collapse of Meccano Ltd. in the UK and the company's takeover by Lines Brothers (Tri-ang) killed off Hornby Dublo, and in France, the ACHO range found itself supplemented by some of Triang's model railway range that had been aimed at the US and Canadian market, and whose scale was therefore already fairly HO-ish. Sensibly, the catalogues distinguished between the Triang and ACHO models (although the Tri-ang range appeared at the the front of the catalogue).