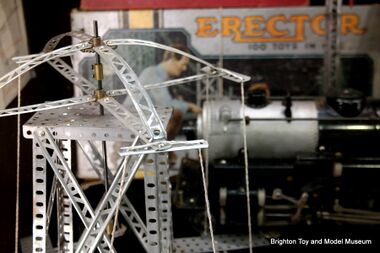 A combination of "original" and "Meccanolike" Erector pieces [image info] 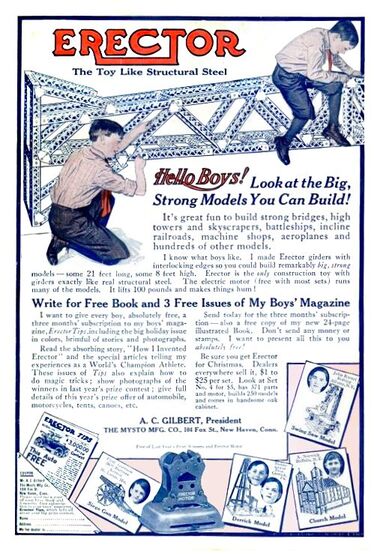 Erector was a metal construction set system invented by A.C. Gilbert in around 1914, at about the same time that Meccano sets started being sold in the US.

Gilbert's erector system initially differed from Meccano in that it was more specialised and less abstract, being designed to reproduce the sorts of temporary girderwork used on building construction sites.

Meccano never managed to achieve the same connection with customers in the US that they'd that they'd managed in the UK, and when the Meccano US factory was lost and Gilbert bought the US rights to Meccano, Gilbert found themselves with two metal construction systems - Erector, which had the customer base and customer loyalty, but which needed expanded, and Meccano, a more flexible system but less locally popular system.

Gilbert responded to this situation by merging the two product lines -- developing and adapting the Meccano system for the local market, but selling it under the Erector name.

The situation reversed some years later when Gilbert went bust, and the owners of the Meccano brand outside the US bought Gilbert's intellectual property rights, including the Erector name. As a result the sets that are now sold in some markets as "Erector Sets" are actually modern Meccano sets, rebadged.