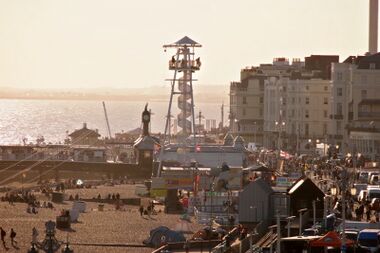 2018: The view West across the seafront Palace Pier area, with the Brighton Zip, centre [image info] 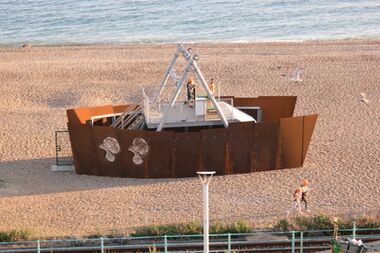 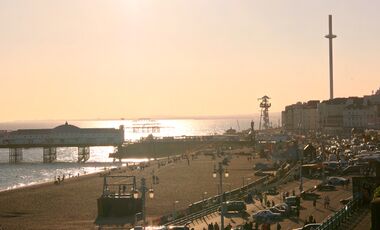 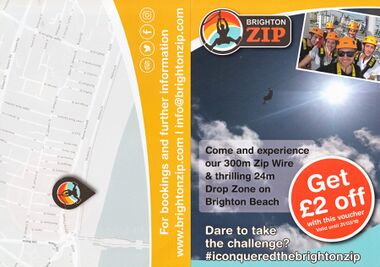 The Brighton ZIP is a tourist attraction "zip wire" ride on Brighton seafront. It officially opened to the public on the first of August 2017.

The "Zip" is the successor to the Brighton Wheel. The Wheel operated from the same site as the current Zip Tower (just to the East of the Palace Pier, and near the Volks Electric Railway's Aquarium Station) until it was closed in May 2016** and disassembled, and a zipline was suggested as a possible replacement. Like the Wheel, the Zip is a tall structure giving views of the seafront, and makes use of the same solid jutting base that was made use of by the Wheel.

The Zip Tower is a white spiral staircase with white spiral safety wall and a platform at the top, and is 17 metres high. At the top of the platform are two parallel zip-wires running East for 300 metres, and ending in a metal structure that looks like (and apparently is) part of a boat hull. Coloured lighting plays over the Zip Tower at night, giving the effect of constantly changing colours.

The use of two ziplines is advertised as allowing pairs of friends to race against each other. More practically it allows more people to use the line per hour (reducing queuing times), and means that a problem with one line (or a rider who gets "cold feet" and needs to spend time persuading themselves to step off the platform) doesn't shut down the whole attraction.