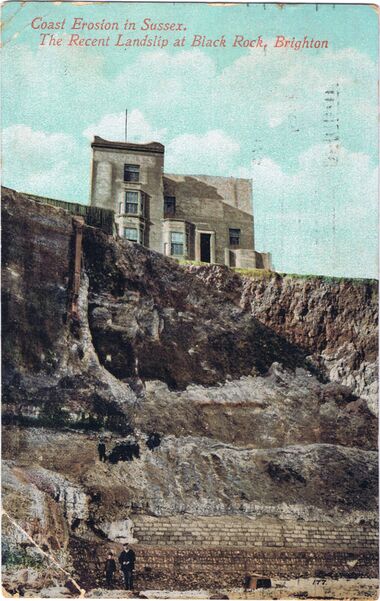 Black Rock, Brighton is an area of the coast near the Eastern end of Kemp Town, were the Kemp Town seawall comes to an end but before the main chalk cliffs start.

Geologically, the area is made of loose chalky and silt deposits with some large embedded rocks, and it has historically been famous for cliff-falls.

The beach at Black Rock is reached from the upper town level by some nice angled planted zig-zaggy paths, which are a good place to stop and eat one's sandwiches after arriving via the Volks Electric Railway and Black Rock Station. However, The secluded nooks and vegetation have given these terraces a reputation for being used for somewhat less family-friendly activities after dark.

From the mid-1930s, Black Rock used to be the location of Black Rock Pool, built during the craze for Lido-building around British seaside resorts that also resulted in Saltdean Lido (~1938). The Black Rock lido was a logical destination for the Volks Electric Railway, and visitors used to be able to then continue past the Pool along the undercliff walkway.

With the destruction of the Pool and the building of Brighton Marina (which overlaps part of the original Black Rock area, the area has a less strong identity, and represents a practical limit to how for one can walk along the beach from central Brighton. Technically, one can walk through the Marina, but this involves passing the derelict site of the lido and navigating a large walled-in tract of Marina car park and the Asda Superstore, which together tend to break the "nature walk", "seaside" and "Victorian heritage" aspects of the walk up until this point.