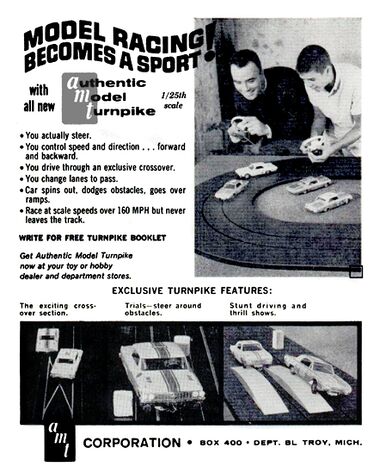 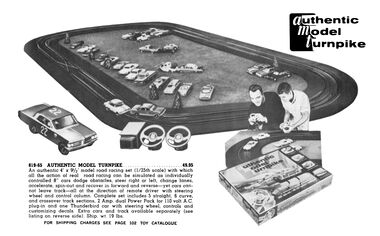 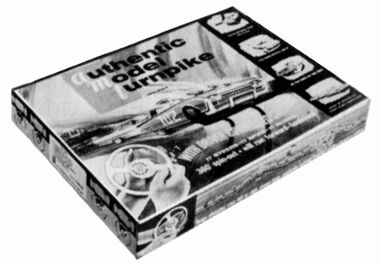 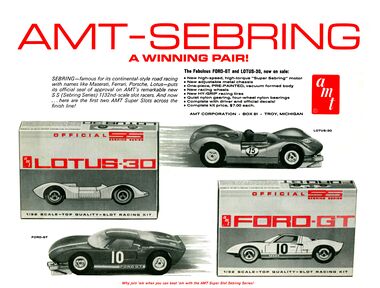 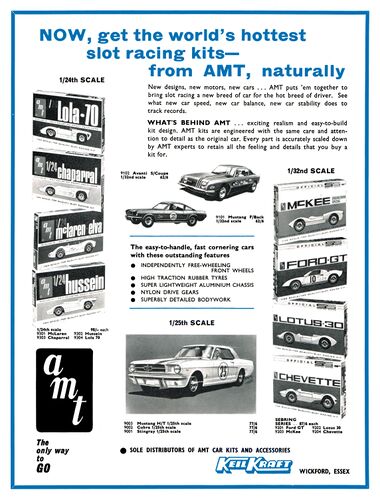 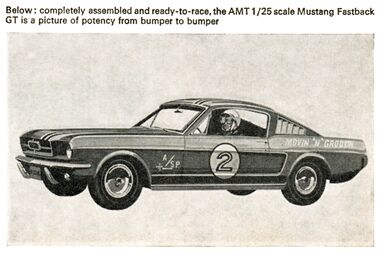 AMT's slotcars (a.k.a. "Authentic Model Turnpike") were initially comparatively expensive, with the cars having steering and a separate chassis (with various wheelbases) that the bodyshells screwed to. Perhaps in an attempt to keep the cost down their first launched set (1962) had two tracks but only came with one car.

AMT was styled on the company's slotcar products, as standing for "Authentic Model Turnpike". AMT car kits started appeared in the 1950s, and the New Jersey Turnpike had opened in 1951 and made an impression on the American public's consciousness as something new and modern.

However, in much of the rest of the English-speaking world, "Turnpike" (meaning a privately operated and maintained toll road) was an archaic and confusing word that was not necessarily understood without the help of a dictionary: the last "Turnpike Trust" in England had shut down just before the end of the Nineteenth Century, and anyone in England who still actually knew what a turnpike was was more likely to associate it with wooden farmer's carts rather than with the latest and most exciting cars from Detroit.

Swerving back and forth on slotted tracks, the individually controlled cars in an electric table-top set provide the feel of stock-car racing. Guided by a steering wheel that turns the cars' wheels, the racers maneuver in and out on a pivoting front wheel assembly. They can go forward or in reverse, pass on a special crossover, go into spins or swing wide on curves.

The cars clip onto an undercarriage beneath the track. Made of plastic, the Authentic Model Turnpike measures 4 by 9½ feet. It's available for about $50 from AMT Corp, Troy, Mich.

You match your imagination and skill with automotive designers and custom car experts when you build the 1964 cars in 1/25th scale AMT 3-in-1 Customising Kits. AMT has the hottest of the '64s. Convertibles and hardtops. Complete with all the parts you need to build stock, custom or competition versions. Guaranteed authentic ... because AMT works with the experts – the men who know! And for 1964, more great features than ever before! Working lights on the Ford 500XL, and Chevy S/S! 1/25 scale drivers with the Imperial and Continental! Special trailer with the Corvette! And many other extras you won't find anywhere else. That's AMT 3-in-1 Customising Kits. The best! Why not see for yourself! Check your favourite store. MILLIONS OF BOYS BUILD WITH AMT CUSTOMISING KITS! HOW ABOUT YOU?

FROM THE KATS AT KIT CITY

Thirty five great 1964 cars in authentic 1/25th scale from AMT. The best there is!

ANY SCALE ... ANY MODEL AMT's DESIGNED TO WIN!

SPEED and HANDLING – All these new slotters hang to the track, thanks to self-adjusting equalisers.

Get a hot new AMT Slot Car in the scale of your choice.