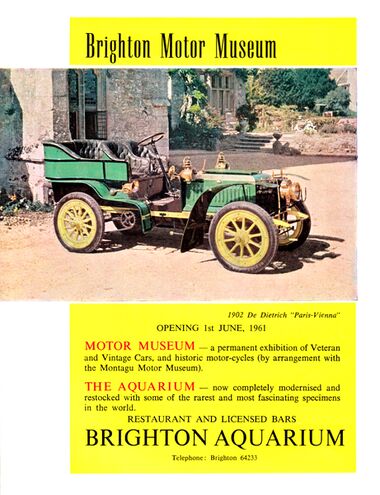 Brighton Motor Museum was a "satellite" of the Beaulieu Motor Museum, and was located in the Brighton Aquarium site between 1961 and 1968, with an entrance on Madeira Drive for the cars.

... in 1961 an Associate Museum was opened in the Aquarium buildings at Madeira Drive, Brighton. The Aquarium, opened in 1872 by H.R.H. Prince Arthur of Connaught, possessed at that time the largest display tank the world had ever seen. Containing 100,000 gallons of sea water, it was more than 100 feet long. The Aquarium was purchased by Brighton Corporation in 1901, and operated by them until 1947, when it was leased out to private enterprise.

To house the collection of cars, the Prince's Hall has been converted into a Museum, and a mechanical lift installed at the Madeira Drive entrance to allow access for the exhibits.This Museum is under the direction of Mr. F.C. Glover, the Managing Director of Aquarium Entertainments Ltd., and was opened by Mr. Donald Campbell, C.B.E., on May 17th, 1961.

The three Museums are complementary to each other, and it is intended to rotate exhibits from Museum to Museum. While cars of specific local interest will be shown in the appropriate place, the organisers have resisted the temptation to specialise, and each Museumwill tell the history of Motor Road Transport on its own.

Due to a major reorganisation of the aquarium site, the present Brighton Motor Museum will be closed down with effect from September 30 next. Negotiations are well advanced for an alternative site in Brighton which is is hoped will be ready for opening at Easter, 1969. A further announcement will be made in due course.