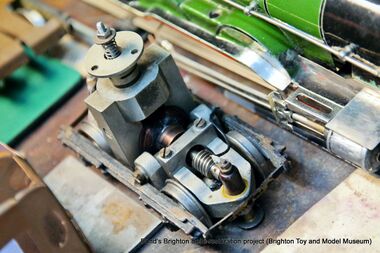 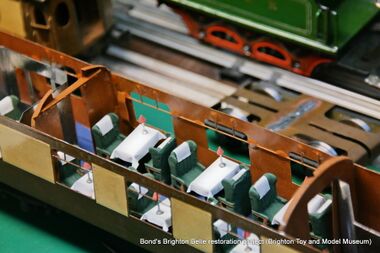 As far as we know, this Bond's Brighton Belle model is the only known contemporary 1930s commercially-produced all-metal engineered gauge 0 model of the Southern Railway's premium flagship Pullman train ... and (due to the Second World War) this unfinished prototype seems to be the one and only example that Bonds got to produce.

The model therefore occupies a unique place in railway and model railway history, and once it had been discovered, the museum could not justify not rescuing and restoring it.

During the course of the restoration, the restoration remit has shifted somewhat – originally the idea was to bring the prototype model up to what would have been its intended level of Bond's finish. As work progressed, we decided to raise the bar, and take an optimistic view of the amount of work that Bonds would have intended to carry out on the bodyshell. Eventually we decided, with the help of archives of plans and photographs of the real Belle, to take the model all the way to a full-blown exhibition-grade finish, with superior lining and paint finishing, and ultra-high detailing.

At this point, the restoration is now essentially complete, but for the installation of an internal electrical lighting system, and we intend to hold a special launch event for it in 2021, COVID regulations permitting.

Although the model was intended to be finished for 2016, the museum decided to take absolutely no shortcuts in its restoration, and to apply the ultimate care to the work, even if this meant some long waits for specific parts to become available, or for Chris to make the machine tooling to recreate missing pieces.

Where we have engineered additional metalwork detailing for the bogies that was not present on the original model, to produce an impeccable visual representation of the real 1930s Brighton Belle, these additional components have been engineered as removable clip-on pieces, so that, while the level of visual detail and accuracy has been improved, we have not physically altered the model's structure, or undermined the integrity of the original design.

The end result is that the model is as faithful to the original 1930s Brighton Belle as could be hoped for, but for the fact that the cars are necessarily below scale length, as normal, to allow them to navigate the tight non-scale curves almost always present in model railways.

Such "pre-service" final development work and "engineering polish" would normally have been carried out by Bond's before delivery to their client as part of the commission, but will now need to be carried out by the museum's specialist workshops.

Although the set's physical bodyshells and wheeling were complete, there was evidence that a subsequent owner had attempted to complete the set's cosmetics with an "amateurishly enthusiastic" paint-job. There was also evidence that the originally-planned "single power bogie" arrangement was not sufficient, and that provision for adding a second power bogie (in the second power car) had been attempted, somewhat crudely.