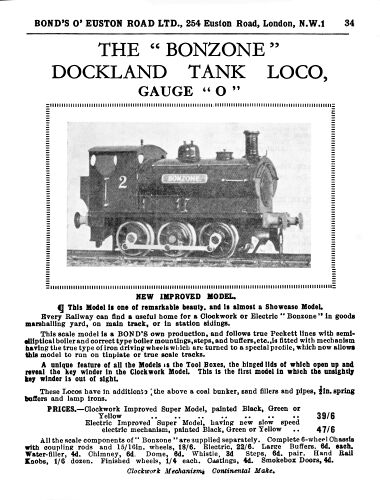 Although the choice of orange paintwork for a locomotive might seem startling, Peckett's engines were industrial locomotives that were sometimes working in dangerous and noisy construction environments, and high-visibility orange paintwork was sometimes used on industrial locos for the same reason that construction workers sometimes wear bright orange safety clothing. Construction and quarrying environments might not always have clearly-segregated areas for track and people, and although it might seem odd that someone on the track might not always hear a slow-moving steam engine approaching, the sound of the engine wouldn't be guaranteed to alert a worker if blasting or drilling or hammering was going on (or if the person was wearing ear-protectors).

This model is one of remarkable beauty, and is almost a Showcase Model. Every Railway can find a useful home for a Clockwork or Electric "Bonzone" in goods marshalling yard, on main track, or in station sidings.

This scale model is a BOND'S own production, and follows true Peckett lines with semi-elliptical boiler and correct type boiler mountings, steps, and buffers, etc., is fitted with mechanism having the true type of iron drivng wheels which are turned to a special profile, which now allows this model to run on tinplate or true scale tracks.

A unique feature of all the Models is the Tool Boxes, the hinged lids of which open up and reveal the key winder in the Clockwork Model. This is the first model in which the unsightly key winder is out of sight.

These locos have in addition to the above a coal bunker, sand fillers and pipes, ½in. spring buffers and lamp irons.

All the scale components of "Bonzone" are supplied separately.