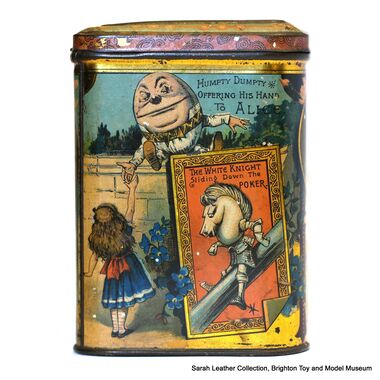 Alice Through the Looking-Glass biscuit tin, panel 1: "Humpty Dumpty Offering His Hand To Alice", "The White Knight Sliding Down The Poker" [image info] 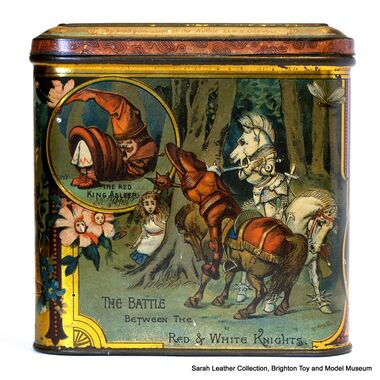 Alice Through the Looking-Glass biscuit tin, panel 2: "The Red King Asleep", "The Battle Between The Red And White Knights" [image info] 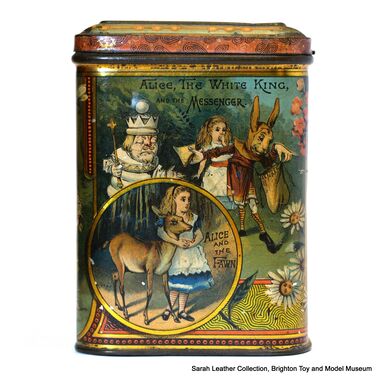 Alice Through the Looking-Glass biscuit tin, panel 3: "Alice, the White King, and the Messenger", "Alice and the Fawn" [image info] 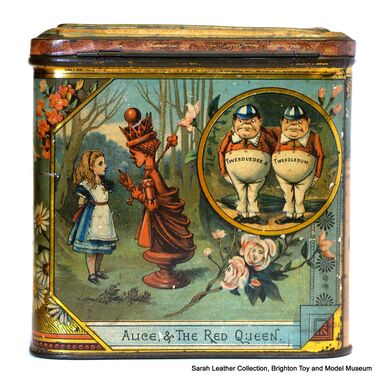 A set of three lithographed tinplate "Alice through the Looking Glass" biscuit tins, with colour John Tenniel illustrations, and produced for Jacobs Biscuits by Barringer, Wallis & Manners in 1892. Online sources often refer to the piece as being an "Alice in Wonderland" biscuit tin, but the scenes and characters are clearly from the "Looking-Glass" sequel, and the lid even says "ALICE THROUGH THE LOOKING GLASS".

The tins are beautifully illustrated on the sides and lid with titled scenes from Lewis Carroll's children's book, "Alice through the Looking Glass".

Carroll (a.k.a. Charles Dodgson) obtained at least a hundred of the tins for distribution to his friends, and gave one to Alice Liddell

Carroll's inconsistent and wildly-varying attitudes during the Biscuit Tin Episode, culminating in perplexity and outrage, are documented in the 2014 book by Zoe Jaques and Eugene Giddens.

When they contacted him in 1891, Carroll seems to have initially rather liked the idea of Barringer, Wallis and Manners making a "children's tin" themed around Alice in Wonderland, once he'd satisfied himself that the printed designs would be satisfyingly permanent, but the company probably had no idea of the potential complications they were getting into by striking up a relationship with the author...

Initially offered fifty tins, Carroll declined and wrote that he only wanted a much smaller number, worried that receiving so many in exchange for the use of his name and characters might be seen as "selling out" to vulgar commerciality. However, some time later after having given the matter more thought, Carroll wrote back to BW&M saying that the reason why he'd declined their offer of fifty was that it wasn't enough – to satisfy all the young people that Carroll wanted to receive the tins, would require one hundred tins. BW&M later had to deal with indignant missives from Carroll that they immediately stop including a compliments slip with his name in, since it wasn't something that he himself had written, that they had broken his confidentiality by using his real name in a way that that workers in the factory might see, and that they cease and desist the low practice of sending out the tins filled with biscuits (which apparently denigrated the dignity and possible higher purposes of the tins).

Carroll also apparently became livid when he realised that his tin had a paper sticker inside the lid advertising Jacob's biscuits. Rather than live with this outrage, or deface the sticker, or simply soak the tin in water and peel the paper off, Carroll returned the tin to Barringer, Wallis and Manners with a dark letter pointedly declaring that the existence of the sticker meant that the tin no longer suited his purposes, and that he had no further use for it.

Jacques and Giddens point out how the "tin" episode illustrates the inconsistencies of Carroll's character – while he was concerned to the point of paranoia that nobody do anything that appeared to capitalise on his name, he wasn't above getting BW&M to send tins to the Duchess of Albany's children, Princess Alice and Prince Charles, and commenting that the association would be good advertising.

J&G also point out that Carroll's keen insight into the workings of the child's mind that was so evident in his writing seemed to have deserted him when he ordered that all further biscuit tins should be sent out to the remaining children on the list without their interiors being contaminated by the distracting presence of biscuits, presumably so that the child recipients could properly contemplate and appreciate the tins without being diverted by the evils of commercial confectionery. To most people, the idea of having biscuit tins sent to children with the biscuits deliberately removed might be seen as a cruel and callous thing to do, given that the biscuits weren't costing Carroll anything.